What's With The Attitude?

In a USA Today piece about Robert Redford‘s The Conspirator, Anthony Breznican says it “follows the race to hunt down the small band of Confederate sympathizers” who helped plot to murder President Abraham Lincoln and his cabinet. 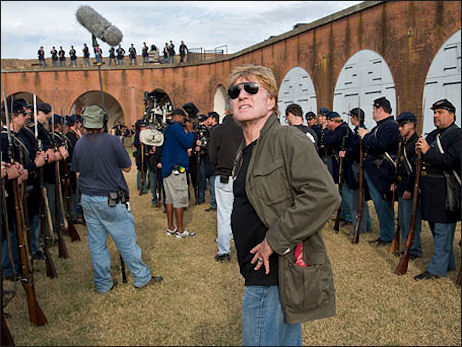 And yet Breznican decides against mentioning what I reported on 4.16 after reading James Solomon‘s Conspirator script, which is that (a) the plot and the chase are handled in flashbacks and (b) the basic plotline of The Conspirator involves a young attorney (James McAvoy) being reluctantly assigned to defend Mary Surratt in her conspiracy trial.

“The main arc belongs to McAvoy,” I explained. “He starts out actively hostile, but comes to see that Surratt has been wrongly charged. But Penn, it appears, will provide the lump-in-the-throat moments.” Redford hedges with Breznican about Surratt’s guilt or innocence, but the script I read seemed fairly resolved about the matter — i.e., she may have been circumstantially guilty in a sense, but she basically got a bum rap.

Then Breznican says a curiously hostile thing — he describes the film as “Law & Order: Civil War Unit.” Which is basically a way of saying “perhaps this movie isn’t so hot with no distributor and all…it seems to me like it might be a little tepid and formuliac, kind of like a TV series.”

I didn’t detect any hint in the piece that Breznican had read Solomon’s script, so why didn’t he do so if he’s going to describe it for his readers? Solomon’s script didn’t feel to me like any Law and Order-type procedural, I can tell you. What I read felt like solid first-rate material — “a sturdily-written, high-calibre thing,” as I said on 4.16. “And there’s no missing the grace and gravitas woven into Surratt’s character.”

Breznican sounds like a bright youngish guy (which he is) half-dismissing the work of a much older guy from another era who hasn’t directed a really good film since 1994’s Quiz Show, and implying that Redford is possibly over the hill. That’s how it read to me, at least. The young getting onto the old.