Why The Fox Bail?

So what queered the talks between Conan O’Brien‘s reps and the Fox Network about a new late-night talk show? This is the tale that needs to be told in the wake of the wowser announcement — which popped through about 45 minutes ago — that O’Brien will launch his comeback talk show on TBS starting in November. The one-hour show will air weeknights at 11 pm. 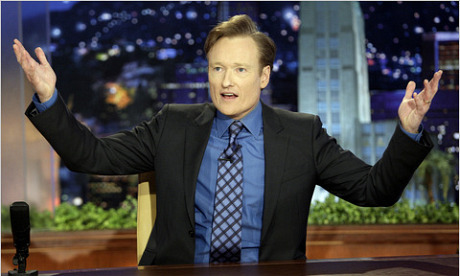 “The news comes as a stunner because Mr. O’Brien was known to be in talks with the Fox network,” reports the NY Times‘ Bill Carter, “and most predictions had him moving there in September or January. TBS was not known to be in the picture. But Mr. O’Brien’s representatives had been quietly talking with that cable network as issues continued to arise with the potential Fox deal.

“The move will surely be closely examined for its implications for the future of broadcast vs. cable television, with one of the biggest stars of recent years in network television abandoning that side for cable.”

I’d like to think (i.e., it would flatter my perception of things) that deep down O’Brien never really wanted to be on the Fox Network because of their ferociously evil, Tea Bagger-pandering agenda. The associations with that network are just too toxic, especially for an entertainer with ties to the under-40 generation. If this was part of the thinking you can bet that O’Brien and his reps will never cop to it in official statements, but maybe O’Brien will give away indicative tidbits in his stand-up comedy tour over the next few weeks.

Or maybe it was reluctance by Fox affiliates to run with a new late-night talk show in an already over-crowded environment.

In a 4.7 Business Week story (thanks to Rich S.), Ronald Grover and Andy Fixmer reported that Fox Entertainment President Kevin Reilly “enjoys a strong relationship with O’Brien, with whom he worked while both were at NBC. But Fox first needs to persuade its affiliates to take a chance.

“‘It’s been a very challenging environment for the station business coming off a recession,’ Reilly says. And he acknowledges that if he can strike a deal with affiliates it could take several years to stitch together a single time slot because some stations will continue to run sitcoms after their news programs.

“One strategy might be to start the show at 11 p.m. in some markets and later in others, according to TV executives with knowledge of Fox’s options. News Corp. could also air O’Brien on some of its less watched affiliate group MyNetworkTV’s stations in New York, Chicago, and elsewhere. With shows like Glee and The Cleveland Show, Reilly has boosted Fox’s ratings by 3% this year and leads in the sought-after 18-to-49-year-old age group. O’Brien would help extend Fox’s edgier brand to late night as well, says Horizon’s Adgate.”

The announcement didn’t say what city O’Brien’s TBS talk show will originate from, but Atlanta — home for TBS — couldn’t be on the table. Los Angeles, I’m guessing, since O’Brien has moved out there lock, stock and barrel.