“The rather distracting debate about Elena Kagan‘s sexuality reached fever pitch this week,” reports Newsweek‘s Julia Baird, “thanks to a powerfully argued series of posts by gay blogger Andrew Sullivan, who insisted that Kagan’s sexual orientation should be a matter of public record if she is going to be confirmed as a Supreme Court judge.

“‘It is no more of an empirical question than whether she is Jewish,’ he argued. “We know she is Jewish, and it is a fact simply and rightly put in the public square. If she were to hide her Jewishness, it would seem rightly odd, bizarre, anachronistic, even arguably self-critical or self-loathing. And yet we have been told by many that she is gay…and no one will ask directly if this is true and no one in the administration will tell us definitively.”

“Let’s get one thing clear,” Baird states. “It should not be an ‘accusation’ to ask if someone is gay, nor a ‘slimy’ attack. Nor should it be considered a ‘charge,’ as a White House spokesman declared it to be last week. Being gay is not a crime, and not a shame. Sullivan has a point. But it is still, for some, a private matter.”

I am of two minds that I cannot reconcile. My basic attitude is “who cares?” or “oh, she’s gay?….good.” I also understand and sympathize with Sullivan’s point in putting Kagan’s private persuasions on the table. I also agree that a bigoted mentality was indicated by that White House statement that allusions to Kagan being gay constituted a “charge.” What’s needed to complete the circle would be a few bigots to flatly say or imply that Kagan’s sexuality should be a factor in determining her suitability for the Supreme Court. But of course, bigots never (or rarely) flatly say anything.

Sang-soo Im‘s The Housemaid, a remake of a 1960 drama of the same name, is a sexual hothouse melodrama made in the spirit of Claude Chabrol and Brian DePalma. It screened at 4:30 in the Salle Debussy, and for the second time in a row I had to sit on one of those half-assed fold-out seats, which are okay for an hour or so and then you begin to feel it.

The DePalma-Chabrol tag means that The Housemaid (a) is about dark currents in a perverse well-to-do family and (b) has been made with a highly polished, primary-color sensibility that underlines every plot point and mood pocket, and ends on a note of flamboyance if not insanity that’s more about the director being in love with how it looks than anything else.

I wasn’t entirely floored, just as I’ve never been that wild about DePalma’s more excessive exercises. Some of what happens in the second half is broad and lurid, and then the stops are really pulled out in the second-to-last scene. But Sang-soo Im (The President’s Last Bang) is a formidable pro, and the cast — especially Do-yeon Jeon, the female lead — give assured high-style performances. That’s the brush this film was made with, and you can either roll with this type of thing or not. I was down with it for the most part. I didn’t fight it, I mean.

For whatever reason I never paid attention to this Magnum Gold ice cream commercial that Bryan Singer directed and Benicio Del Toro & Caroline De Souza Correa starred in. It began showing a couple of months ago in France. It just played on a flatscreen here at the Orange wifi cafe. Benny!

I caught this morning’s 8:30 am screening of Wang Xiaoshuai‘s Chongquing Blues — the general grimness, slow pace and repetition did me in. I tried too late to get into an 11 am screening of Sabina Guzzanti‘s Draquila — Italy Trembles, a docu about Silvio Berlusconi. I’ve just come out of Radu Muntean‘s Tuesday, After Christmas — an emotionally rounded, very well acted Roumanian drama about an extra-marital affair and its inevitable consequence. And now I have 15 minutes to make a 4:30 pm screening of Im Sangsoo‘s The Housemaid. No time to write, much less think things through. 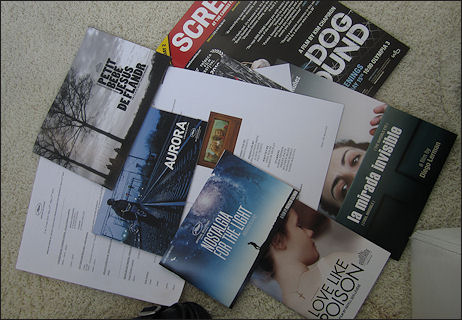 I’ve twice read Mike Goodridge‘s explanation story about why Bob Berney bolted from Apparition….and I still don’t entirely get it. I get the part about Apparition having gradually slid into a weakened financial state due to distribution disappointments such as The Runaways and Bright Star. Then came the coup de grace, he says, when Apparition lost out on distributing Fair Game, the Doug Liman political drama, which apparently led Berney to see the company as a sinking ship.

Indiewire‘s Anne Thompson has disputed Goodridge’s report, saying that the Fair Game deal was “not a factor…Summit always had first crack at North American rights to the Doug Liman thriller, which is budgeted in the $30-million range…not only do Pohlad and Summit have a long relationship, but Participant is a majority investor in Summit.”

Thompson explains that The Runaways was “the movie that most tested the Pohlad/Berney partnership…after a splashy media launch at Sundance, Pohlad altered Berney’s distribution plans, drastically pulling the film back from a planned wide release to a more conservative platform. In fact, the movie played best inside the art-house niche with fans of the original 70s group, topping out at $3.5 million. But in today’s marketplace, many movies don’t get that far.”

“Cannes competition title Fair Game appears to be the chief reason behind Bob Berney’s abrupt departure from Apparition, the company he co-founded with Bill Pohlad and unveiled this time last year.

“But when Summit Entertainment bought the film last month in a deal closed by CAA for River Road and co-financiers Participant Media/Imagenation Abu Dhabi, the terms of the deal were not as rich as expected. Summit wasn’t required to come up with a huge MG and will probably release Fair Game on a platform basis — Berney’s specialty.

“Berney is thought to have been surprised by the Summit/Fair Game deal which was presented to him as a fait accompli.

“River Road, which is run by Mitch Horwits for Pohlad, has a close relationship with Summit which handled international sales on Fair Game, and was known to be disappointed by Apparition’s release of its production The Runaways, the rock and roll biopic which has grossed just $3.5 million after two months on release in the US.

“‘It got good enough reviews but it didn’t cross over,’ Berney told Screen last month. ‘It plays like an art film.’

“Berney is attending Cannes this week, while plans for the future of Apparition are as yet unclear.

“‘I have no comment at this time and wish Bill Pohlad much success,’ said Berney when reached yesterday.”

George Nolfi‘s The Adjustment Bureau (Universal, 9.17) is some kind of trippy spooky thing starring Matt Damon (wearing one of those abominable straw hats that regimented American conformists wore in the ’50s) and Emily Blunt. Based on a 1954 Philip K. Dick short story called “The Adjustment Team,” it’s about the relatonship between a politician (Damon) and a ballerina (Blunt) being “thrown into disarray by the mysterious forces at work beneath the surface of their virtual world,” etc.

Set in the mid ’50s, it’s some kind of Matrix-y type deal. “Do we control our destiny, or do unseen forces manipulate us?,” etc.

Last month an IMDB guy named “Master Haas” claimed to have seen a research screening of The Adjustment Bureau, and wrote (for what it is worth) the following:

“Surprisingly good movie! Damon and Blunt had great chemistry. The ending was a bit of a letdown though. They seemed aware of this since they asked us specifically about the end. If they can make the ending a bit more interesting or powerful, they might have a great movie on their hands…

“If I were them I’d be worried about opening so close to Inception, as this could get lost in the shuffle. A holiday release seems much more appropriate as [this] is a fairly light, breezy film. Think The Matrix filtered through Catch Me If You Can.”

I caught a film late yesterday afternoon that I need to maintain silence about until tomorrow morning. But it turned me around so I texted a couple of people about my feelings when I emerged, and then I went into the Orange Cafe to fiddle around and ran into Awards Daily ‘s Sasha Stone. We subsequently met Inside Job co-cinematographer Svetlana Cvetko and editor-screenwriter David Scott Smith for a nice noisy dinner around 9:30 pm. 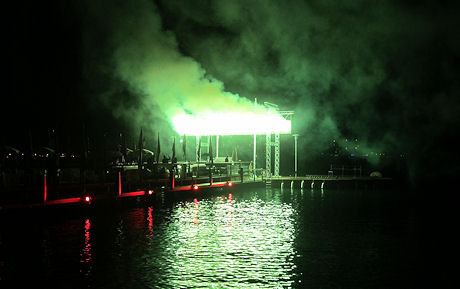 Washington Post critic Ann Hornaday, I learned, had suffered a technological trauma in the late morning when her computer suffered a fatal seizure. Tough breaks add to the stress…I’m sorry. A new hard drive is being installed, or something along those lines.

And then I scooted off to the Robin Hood party, which was lavishly catered and very nice except for two belligerent security guys who wouldn’t let me in because I had a big camera slung around my neck. A Universal publicist gently but forcefully interceded — thanks much! Inside I chatted with L.A. Times columnist Pete Hammond and Fox co-chairman Jim Gianopulos. And then nature called and I learned soon after that the party didn’t have facilities to help guests deal with such matters. So I walked out to a deserted area of the beach about 50 yards to the west. And then the security guy wouldn’t let me back in even though I had an all-access pass. That’s when I knew it was time to pack it in. 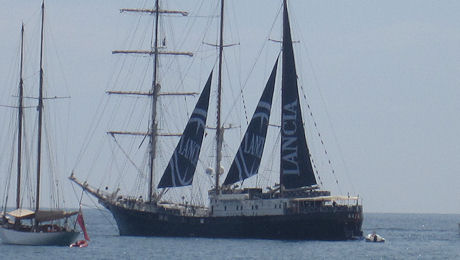 Every year I fantasize about being motor-boated out to one of the ships in the bay and having drinks or dinner on-board. It’ll probably never happen. 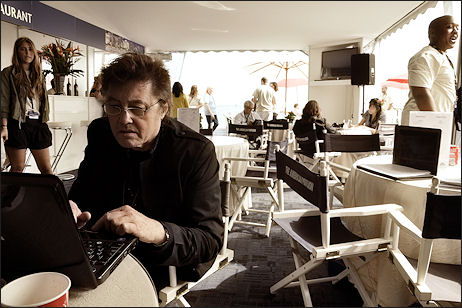 Every year I run one of these Orange Cafe videos — an attempt to convey the sense of meditative solace and and safety and serenity, even, that working here provides. It’s the emotional and spiritual ground zero of the festival, for me.

Indie publicist Adam Kersh (formerly of 42West) sent me this video of Daddy Longlegs co-director Benny Safdie in a recent sandwich-board attempt to attract attention for his film, which opens Friday, 5.14 on one screen at the IFC Center. “Benny took to the streets last weekend to make sure he had a few more people on his side as Daddy Longlegs goes head-to-head with Robin Hood (opening on 3,000+ screens),” etc.

Daddy Longlegs is a movie about fathering, or more particularly “a swan song to excuses and irresponsibilities; to fatherhood and self-created experiences, and to what its like to be truly torn between being a child and being an adult.”