I would have respected Steven Spielberg‘s ambition if he’d decided to remake Robert Bresson‘s Au Hasard Balthazar (1966), a classic Christ parable about the suffering of a donkey as he’s transferred from owner to owner and is mostly treated with cruelty. Spielberg would have added the usual sentimentality, of course, but it would have been ballsy to step onto Bresson’s turf — I for one would have saluted — and it would have played into Spielberg’s strength as a distinctive helmer with keen mise-en-scene instincts. 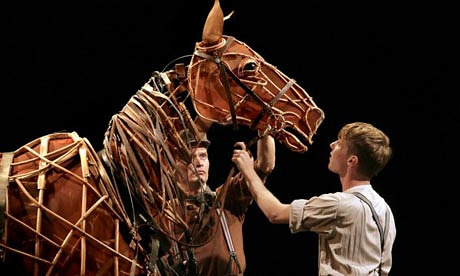 A scene from the 2009 London stage production of The War Horse.

Instead, Spielberg has decided to direct The War Horse, a film version of a 2009 London play about a poor put-upon horse named Joey as he’s transferred from one owner to another during the time of World War I — from a British farm boy to the British cavalry to the German army and back again.

Nick Stafford‘s play, which is based on a children’s novel by Michael Morpurgo, is closer to Spielberg’s natural wheelhouse. It’s an anti-war piece that has simple strokes, and which was aimed at kids to begin with. Plus it has ample sentimentality — (a) a kind of Lassie Come Home story about a boy and his horse being separated, (b) a scene with German and British soldiers impulsively ceasng hostilities in order to save the wounded Joey’s life, and (c) a finale that some book reviewers have described as contrived and cloying. Plus it will also allow Spielberg to half-riff on Bresson’s film without having to acknowledge this, and to try and out-shoot the trench-warfare scenes in Stanley Kubrick‘s Paths of Glory.

So that’s the deal with The War Horse — a possible lunge at Oscar-level kudos, a Spielbergian hack move, another attempt at mass emotional manipulation, a sprinkling of art-film pretension, and yet a chance for Spielberg to show his stuff as a strongly visual storyteller who doesn’t need the engine of dialogue.

Plus it’s another way for Spielberg to avoid directing the Abraham Lincoln movie, which he’s always been intimidated by regardless. He wouldn’t pull the trigger on this project for years on end, presumably because it didn’t look commercial enough to the studios, and is now cowering even deeper in the closet with Robert Redford‘s The Conspirator having stepped in as a similar-type period drama about Lincoln’s assassination.

When I think of Spielberg these days, I think of a rich bearded toad wearing spectacles and a baseball cap.