Could Criterion be up to its old Third Man tricks in its forthcoming Bluray of John Ford‘s Stagecoach (5.25)? Delivering a Blu-ray of a decades-old classic that not only looks un-finessed and un-improved (i.e., like a good but less-than-dazzling celluloid print playing at the Los Angeles County Museum of Art in 1983) but faintly scratched and speckled and lousy with grain? And which sounds “flat” to boot? 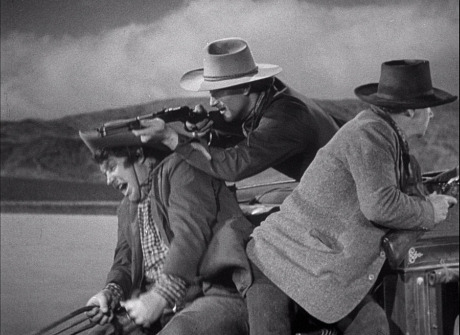 To go by Gary Tooze‘s DVD Beaver review, this seems like a distinct possibility.

You need to read this with an understanding that all online DVD and Bluray reviewers tend to tend to look for ways to flatter the appearance of new releases. I’m not saying Tooze lacks integrity — I trust his judgment for the most part and respect his knowledge of the field — but in my opinion he does, like other reviewers, sometimes err on the side of generosity. My point is that even with this dynamic in play, he expresses a form of mildly upbeat disappointment with the new Stagecoach, and suggests that it’s another manifestation of the Criterion purist philosophy when it comes to older films — i.e., make ’em look like film, and no better or worse than they looked when they played in big-city houses on opening day.

In my humble opinion a Bluray of a 1939 black-and-white film should look a little better than that. Stagecoach, I feel, should look the way Ford imagined it might look in his wet dreams, or the way the guy at the processing house wanted it to look — as clean, crisp and silver-satiny as the 1939 monochrome process allowed and then some. It should look like black-and-white plus, which might be (and I want to describe this properly) what Ford saw with his naked eye as he shot his Monument Valley footage but in monochrome — a razor-sharp image with rich velvety blacks and painterly grays and all kinds of subtle gradations.

An ideal Stagecoach sure as shit shouldn’t look like a decent, good-looking but imperfect print, which is what Tooze’s frame-captures suggest.

Criterion’s Stagecoach, says Tooze, “has strong grain structure” — fire drill! ding-ding-ding-ding-ding! — “and because of lesser manipulation seems to show more damage marks (speckles and light scratches)” than the two previous DVD versions. Tooze then tries to put a sheen on this observation, stating that he’s “okay with this” and he’d “rather have the marks than the over-digitization.”

And then comes the Big Whopper: “Masters of Cinema’s incredible transfer of F.W. Murnau‘s City Girl seems to have raised the bar to an inordinate level and this can affect our expectations on such older titles brought to 1080P resolution, like Stagecoach.” 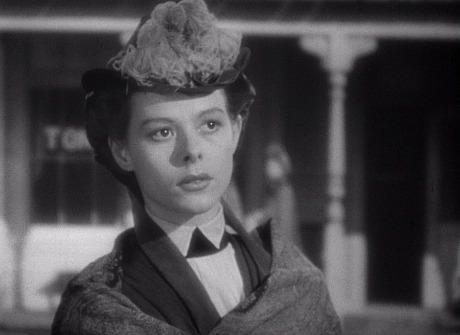 My mouth dropped open when I read this sentence. Tooze is flatly saying that a recently-released Bluray of a 1930 film — shot eight or nine years before Stagecoach, which almost certainly means with more primitive camera and lighting technology — is so pleasing that it creates an unfair standard for Criterion to compete with, and that Stagecoach might be more satisfying to those who haven’t seen the City Girl Bluray!

Then he turns around and decides he needs to say something much nicer. So he says that “while the Criterion improvement in detail and film textures may be only marginally apparent in the screen captures, it becomes much more prominent when in motion.” The Criterion Stagecoach, he insists, “displays dramatic superiority on my system…it has never looked better for home theater consumption.” Okay, maybe. By comparison to previous Stagecoach versions, he means.

But if we could hear the inner Tooze he would probably be muttering to himself, “Gotta be positive about this stuff. The Criterion guys know what they’re doing. I get where they’re coming from. Pure film! But that goddamned Murnau Bluray…sure fucked things up for me! But I have to downplay this. Gotta butter the toast.”

The sound on the Criterion Stagecoach hasn’t been boosted or deepened either, Tooze says. Criterion has “stayed ‘original’ in keeping the single channel audio,” he says. “It is flat but there is a certain level of crispness over the DVD that comes through if you have an ear for it.” Well, do you have an ear for this kind of thing, western fans? Do you have a special liking for the way movies used to sound in the old studio-system days? You know, coming out of those old brick-shithouse mono speakers that sat behind those heavy velour curtains?

May 6, 2010by Jeffrey Wells43 Comments
« Previous post
Witness to a Disaster
Next post »
Survival of the Fittest