After my Ellen Barkin encounter I went to Lucy Walker‘s Countdown to Zero, a doc about the proliferation of armed nuclear devices, but didn’t see it due to the flu-like thing that’s been taking hold within. I promptly went under. Sharon Waxman will confirm this as she was sitting right beside me. 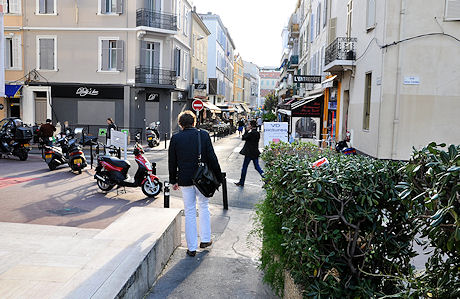 Will you look at that slightly stooped-over posture? Like a mailman at the end of the day. An ex-girlfriend told me a few weeks bacjk to sit up straight and stand up straight. Now I get what she meant. There’s nothing cool or soulful in slouching or stooping. Stand hard and tall like a Marine, or stand not at all.

Being too shagged to write and needing a late afternoon time-filler, I went to a second showing of Charles Ferguson‘s Inside Job, and it was no less crisp or brilliant or urgent for that. I was allowed to sit in an elite reserved row, five or six seats down from Sony Classics co-honchos Michael Barker and Tom Bernard. And then Oliver Stone arrived at the last minute and sat right next to me.

I was in that same depleted mode, of course, but I didn’t nod off — a credit to the quality of the film, I suppose.

I tried to write a bit more and failed. And then I bought some groceries, and stumbled back to the apartment. I flopped down on the couch and promptly went out. I woke up shivering at 2 am — no blanket, lying there in my clothes, shoes still on — and grabbed the blanket, which is heavy and slightly itchy, and went back out.