I watched the just-released Saving Private Ryan Bluray last night, and I must say that the first half of the over-praised D-Day landing sequence gets a little less impressive every time I see it. Some of my beefs about the first few minutes of this sequence are as follows: 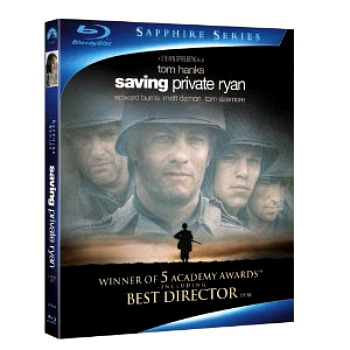 There’s a shot of the landing craft in the beginning that allows us to see a vast ocean area behind it, and there’s no armada whatsoever. No ships, no fog, no planes…nothing.

Some troops splash into the surf and are shown sinking twelve or fifteen feet down in an underwater shot. I don’t believe that any landing craft commander would drop troops into water that deep, which is almost tantamount to killing them with the heavy gear on their backs. I also don’t believe that machine-gun bullets can zap guys who are ten or twelve feet below the surface. I’m not a D-Day invasion veteran and I’ve never been in combat, but I think director Steven Spielberg made this stuff up.

I realize, of course, that the sea water in The Cove was totally red after the slaughter of dozens of dolphins, but that was a small body of water undiluted by currents and unchurned by waves. The sea in Saving Private Ryan is affected by these elements, but is nonetheless shown as 100% popsicle red after ten minutes of fighting — as if a ship had poured hundreds of gallons of blood (or vegetable dye) into the water offshore so that Spielberg could make a point about young soldiers bleeding and dying.

There’s no reason for any troops to have survived the first assault wave, given the German machine-gun fire that mowed them down like ducks them the second the landing-craft flaps went down. From what Spielberg shows us, there’s just no way for anyone to have made it onto the beach, much less overrun the concrete bunkers. My understanding is that the first waves at Omaha and Utah beach took absurdly heavy casualties, and that it wasn’t until the fourth or five waves that any kind of serious pushback happened against the Germans.

Tom Hanks, playing an Army Captain, goes into shock at the very beginning as he squats near the water — not ducking or shielding himself, just sitting there with a dumbfounded expression as various men are either blown into pieces or their arms are blown off or whatever. In the real world any Captain who mentally checks out in the heat of battle would have been quickly relieved of duty — the Army can’t afford fog-heads and battle-fatiguers leading its troops.

This is all apart, of course, from Spielberg’s shameless cheat at the beginning tn which the old veteran’s eyes are shown blending into Hanks’ peepers on the landing craft — a move that deludes viewers into thinking they were looking at an elderly Hanks in the opening cemetery sequence. Has there ever been a major director who’s deliberately misinformed his or her audience as baldly as Spielberg does here?