Isn’t a movie that fans the flames of the old “William Shakespeare didn’t really write all those plays” controversy a kind of literary birther flick, in a sense? Roland Emmerich‘s currently rolling Anonymous, which alleges that Edward De Vere (Rhys Ifans) was the actual author, strikes me as such. 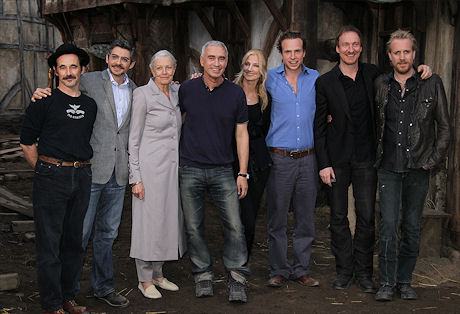 Pic is nonethless being called a “political thriller.” A friend who’s read John Orloff‘s screenplay says “this is the best screenplay I have read in ten years. It is clean and frightening and elegant — a kind of All The President’s Men set during the time of William Shakespeare. It’s a mind bender and very convincing. If it was not Emmerich but, say, Michael Mann or Ridley Scott directing we would already be engraving the Oscar — it’s that good. Luckily, Roland has brilliant actors pretty perfectly cast.”

What a curious side trip for Emmerich, given his usual wont.