In recognition of MGM Video’s upcoming Bluray release of Paul Verhoeven‘s Showgirls, I’m reposting an August 2007 piece about a very special screening of this legendary howler at Robert Evans‘ Beverly Hills home in the early fall of ’95: 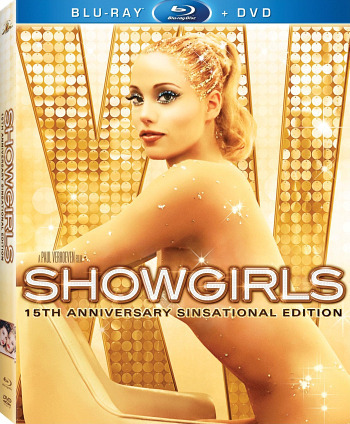 “It happened in Evans’ legendary rear bungalow, which lies behind his egg-shaped pool in the backyard of his French chateau-styled place on Woodland Avenue. With Jack Nicholson of all people, as well as Bryan Singer, Chris McQuarrie, Tom DeSanto and two or three others. And with everyone hating it but sitting through the damn thing anyway because Nicholson had dropped by to see it and nobody wanted to mess with the moment.

“All that ended when Nicholson, who was sitting right under the projection window against the rear wall, stretched his arms and put his two hands right in front of the lamp. The hand-silhouette on top of Elizabeth Berkeley and her grinding costars conveyed his opinion well enough, and suddenly everyone felt at liberty to talk and groan and make cracks and leave for cigarette breaks.

“Nicholson and Singer ducked out at one point, and I joined them. Their chat was all about Nicholson wanting to bond with Singer — my presence was totally superfluous — but it was worth the faint humiliation.

“I was Evans’ journalist pal that year (or part of it, at least). I had written a big piece about Hollywood Republicans earlier that year for Los Angeles magazine, and Evans had been a very helpful source. As a favor I’d arranged for him to meet some just-emerging GenX filmmakers — Owen Wilson, Don Murphy, Jane Hamsher, et. al. — so that maybe, just maybe, he could possibly talk about making films with them down the road. 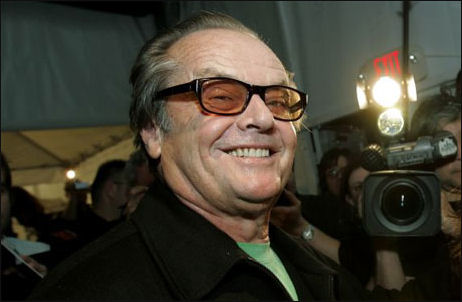 “Anyway, it was sometime in late September and Evans, myself, Singer, DeSanto and McQuarrie were having dinner in the back house, and Evans was doing a superb job of not asking the younger guys anything about themselves. He spoke only about his storied past, his lore, his legend. But the food was excellent and the vibe was cool and settled.

“Then out of the blue (or out of the black of night) a French door opened and Nicholson, wearing his trademark shades, popped his head in and announced to everyone without saying hello that ‘you guys should finish…don’t worry, don’t hurry or anything…we’ll just be in the house…take your time.’

“What? Singer, McQuarrie and DeSanto glanced at each other. Did that just happen? Evans told us that Nicholson was there to watch Showgirls, which they’d made arrangements for much earlier. He invited us stay and watch if we wanted. Nobody wanted to sit through Showgirls — the word was out on it — but missing out on Nicholson schmooze time was, of course, out of the question.

“There was some schmoozing after it ended. The general unspoken reaction, I sensed, was “well, that‘s over, thank God! I mean, imagine what it must feel like to pay to see this thing.” Nobody said this in so many words, of course. 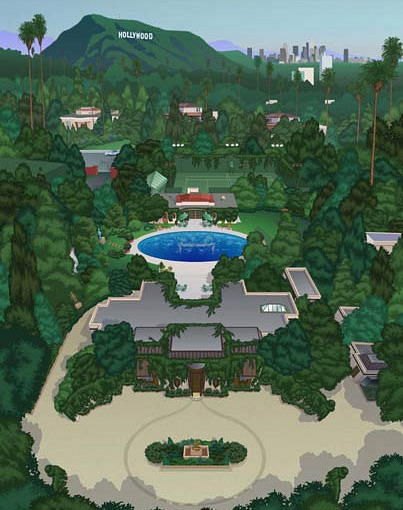 A Cartoon Central rendering of Evans’ French-styled mansion. The Showgirls screening happened in the rear abode.

“McQuarrie, basking in the vibe, said something to Singer in shorthand that basically suggested that they’d clearly reached a certain plateau in their careers for something like this to happen, and wasn’t it cool? Again, the words weren’t spoken.

“I recall DeSanto (Apt Pupil, X-Men, X2, Transformers) introducing himself to Nicholson and the then-58-year-old star, who’d brought two women with him, saying, ‘And it’s very nice to meet you, Tom.’ Gesturing towards Girl #1, he then said to DeSanto, ‘And I’d like you to meet Cindy and…’ Lethal pause. Nicholson had forgotten the other woman’s name. He half-recovered by grinning and saying with his usual flourish, ‘Well, these are the girls!’ The woman he’d blanked on gave Nicholson a fuck-you look for the ages.

“We all said goodbye in the foyer of Evans’ main home. Nicholson’s mood was giddy, silly; he was laughing like a teenaged kid who’d just chugged two 16-ounce cans of beer and didn’t care about anything. I was thinking it must be fun to be able to pretty much follow whatever urge or mood comes to mind, knowing that you probably won’t be turned down or told ‘no’ as long as you use a little charm.”