Charles Ferguson‘s Inside Job, which screened early this afternoon, is a highly absorbing, meticulously composed hammer doc about the causes of the ’08 financial meltdown. Most of us have some kind of understanding of the whys and wherefores, but Ferguson lays it all out like a first-class table setting and makes this titanic crime seem extra vivid. 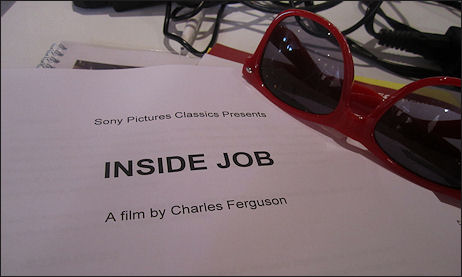 The American public was robbed blind and is still being made to suffer by an arrogant den of thieves, and the enormity of their power-corridor hustle is almost too vast and labrynthian to comprehend. But Ferguson’s doc makes it more comprehensible than in any presentation I’ve seen thus far. And yet as sharp and hard-bullet as it is, Inside Job doesn’t provide any release or crescendo. How could it? The bad guys are still running the show, etc. It mainly made me grind my teeth.

Every Average Joe and tea-bagger needs to see this film at least twice and take notes each time. (Or at least read the press notes.) Will they? Of course not. Inside Job will only play to the educated liberal urbans — the only social class that’s even half-inclined to spend ticket money on documentaries.

Inside Job is brilliant, perceptive, very well organized, necessarily angry or at least confrontational, and narrated by Matt Damon. And great looking — the gleaming, superbly lighted, crystal-clear lensing by Kalyanee Mann and HE pally Svetlana Cvetko is easily the most handsome and lustrous I’ve seen at the festival so far.

The problem is that none of Inside Job feels especially jolting. It is basically content to “get it right” and “tell it better,” which is more than enough for me. But will that be enough for at the attention deficit disorder crowd? 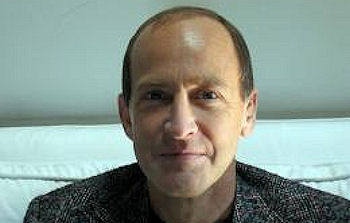 It delivers, in any event, a clear, razor-sharp portrait of a gang of blue-chip ogres and world-class motherfuckers (Summers, Paulson, Greenspan, Geitner, etc.), starting with their initial unleashing during the Reagan-era deregulating and moving through a litany of Bush 41, Clinton and Bush 43 sign-offs, conflict-of-interest corruptions, revolving-door deals and mutually beneficial handjobs.

Too many billions were available, they all got greedy and created games and schemes in order to line their pockets, and here we are. And Barack Obama hasn’t done jack about restraining this culture since taking office.

But unlike No End in Sight‘s bracing explanations of American cockups in Iraq, there’s not much in Inside job that feels especially new or surprising. It’s really quite wonderful how it explains the most destructive mass robbery in history in such a clean and concise fashion. But I fear that it’s arrived too late. If it had been shown at last year’s Cannes festival, or even at last September’s Toronto festival, it obviously would have felt more vital or timely. And yet it’s very, very good for what it is.