President Obama will certainly nominate Elena Kagan to the Supreme Court, according to an MSNBC news story written by Pete Williams that posted an hour ago. 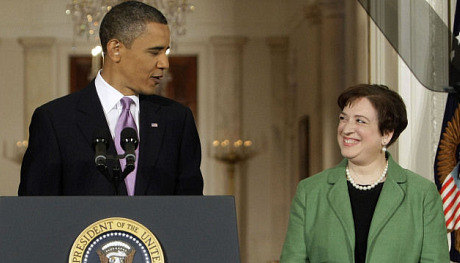 “The general understanding is that she’s (a) quite brilliant, (b) ideologically centrist if not conservative (Salon‘s Glenn Greenwald wrote yesterday that “replacing Stevens with Kagan would shift the Supreme Court substantially to the right on a litany of key issues”), and (c) openly gay.

“If Kagan is in fact nominated Team Obama will be viewed as having gone the cautious if not vaguely chickenshit route, considering that Kagan’s conservative leanings will make it hard for Republicans to sqawk all that loudly and will deprive them of an election-year issue. Unless, of course, they want to play the anti-gay bigot card.”

Or the anti-overweight card, which Republicans would never exploit given that a sizable percentage of their supporters are fast-food eatin’ plus-size types.