Last night I attended a special Tribeca Film Festival screening of Amir Bar-Lev‘s The Tillman Story (Weinstein Co., 8.20) — far and away one of the finest films I’ve seen this year, and a likely contender for the 2010 Best Feature Documentary Oscar. I know it’s early but this movie has the stuff that engages and holds and sinks in deep.

I felt just as stirred up last night — seething, close to tearful — as I was after my initial Sundance viewing three months ago. Because this is not a film about the Middle East conflict but about a stand-up American family and how they responded (and continue to respond) to an orchestrated governmental obscenity that tried to diminish the memory of a fallen son.

I’m speaking, of course, of former Arizona Cardinals safety and U.S. Army Ranger Pat Tillman, and particularly his April 2004 friendly-fire death in Afghanistan — a result of his being shot three times in the head by a fellow U.S. soldier. It happened because of the usual idiotic confusion, and some young intemperate guys who wanted to be in a fire fight and acted foolishly in the heat of the moment. Tillman was enraged that his own fellows were shooting at him, of course, and his last words were an attempt to get them to wake up — “I’m Pat fucking Tillman!”

The obscenity was the attempt in ’04 by the U.S. military and Bush administration to make political hay out of Tillman’s death by manufacturing a bullshit scenario that claimed he was killed by Taliban troops and that he died in an effort save his fellow troops. 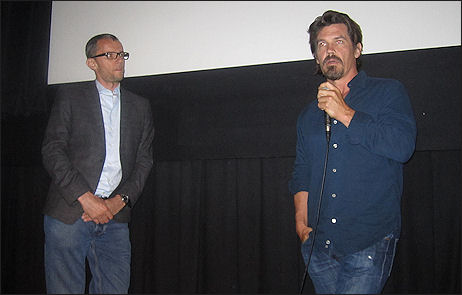 Of course, 97% of American moviegoers are going to ignore The Tillman Story when it opens because (a) they’re resolutely opposed to seeing any film that has anything to do with the conflicts in Iraq or Afghanistan and (b) they don’t much like documentaries anyway, and (c) they just want to chill out and be entertained. The fact that The Tillman Story leaves you feeling angry and alive and engaged with the actual world will most likely have no effect on this determination

Producer John Battsek and narrator Josh Brolin did a q & a following the screening, which ended around 11:40 pm. Brolin, a good hombre, mentioned he’ll be doing Cannes promotional duty for five days, partly for Oliver Stone‘s Wall Street 2 and partly for Woody Allen‘s You Will Meet a Tall Dark Stranger.