Oliver Stone‘s Wall Street 2: Money Never Sleeps (20th Century Fox, 9.24) is an intelligent, briskly paced, rat-a-tat financial tale that moves along nicely for the first 75% to 80% of its running time — not brilliantly but sufficiently, offering a more-or-less decent ride. And then it blows itself up during the last 25 minutes or so. 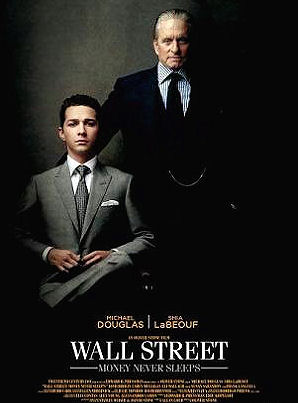 Or so it seemed to me. Some have told me they disagree, but I know (or think I know) when a film is gutting itself emotionally. WS2 does this with a sudden turnabout in the character and actions of Michael Douglas‘s Gordon Gekko character, and I can’t figure any way to explain this without announcing that spoilers are just around the corner.

WS2 screened this morning for Cannes Film Festival press. I saw it a couple of days ago at the Star plex on rue d’Antibes.

The Manhattan-based drama takes place 21 years after the 1987 original, and uses the 2008 stock market meltdown as a major plot point. But it’s primarily a family drama about a son (Shia Lebeouf‘s Jake Moore), two fathers (Gekko and Frank Langella‘s Lewis Zabel, a first-act presence whom Jake regards as a mentor), and a daughter (Carey Mulligan‘s Winnie Gekko).

The Gordon-Winnie relationship is the core of the thing. After serving seven or eight years for insider trading and being released in 2000, Gekko has become an author of a Wall Street tell-all book and, we’re told repeatedly, a genuinely reformed whore — an infamous Wall Street shark who’s not only seen the error of his ways, and who wants to be a good and caring father to Winnie. And yet she despises him for his selfishness and bad parenting that resulted, she believes, in the drug-related death of her brother (and Gekko’s son).

This echoes into Douglas’s own life, of course, as it mirrors to some extent the drug-related troubles of his son Cameron, who was recently sentenced to prison on a drug charge. Douglas has beaten himself up over this in interviews, acknowledging that he’s probably responsible on some level due to having been an indifferent or absentee parent during his 1980s and ’90s heyday. 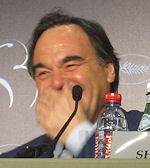 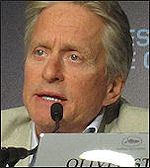 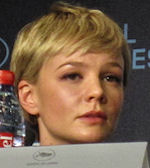 The plot is partly about Jake wanting to stick it to Josh Brolin‘s Bretton James, a high-level trader who ruined Zabel and, Jake believes, more or less goaded the old lion into suicide, and his teaming with Gekko in order to manage this. It’s also about Jake acting as a kind of go-between between Gordon and Winnie, whom he loves dearly and intends to marry.

This leads to the most emotionally affecting moment in the film, set on the steps of the Metropolitan Museum during a party. Gordon begs Winnie to forgive him for being a prick, and begins to convince her that he feels genuinely tortured about his son’s passing, and that he really wants to make amends.

And then — here comes the spoiler — Stone and the script turns cynical and throws Gekko’s older but wiser, seen-the-light character under the bus. He reverts to the old Gordon with his using-and-taking side resurfacing. And when this happens the film drops dead. Its heart simply stops beating. You can’t build sympathy for a character by proving in this and that earnest way that he’s become (or is trying to become) a better person, and then say “fake out!” Or at least, you can’t do that with me.

I felt as if the movie was saying, “Look, we know we’ve sold you on the reformed Gordon and have used Douglas’s real-life history to put it across and all, and we’re sorry to do this but…not really! A shark can’t change his spots! Bad-ass Gordon is back!”

Except he isn’t. The Gordon Gekko of yore was a wolverine, but also a gifted combatant who rationalized his behavior with a harshly realistic view of human nature. “We’re all greedy fucks,” he basically said in Stone’s original 1987 film. “I just happen to be better at grabbing all I can than most.” But Gekko doesn’t “shark” his way into financial triumph in Wall Street 2. He pulls a slimeball move that further ruptures things between himself and Winnie.

Why did Stone and his screenwriters — Allan Loeb and Stephen Schiff share the credit — do this? Because they know Gekko has become a villainous cult hero over the last 23 years, and they wanted to deliver this Prince of Darkness in order to satisfy the fans.

And then comes a finale between Douglas, Lebeouf and Mulligan that tries to sell the notion that Gordon can be forgiven yet again because now he’s really seen the light. This scene is purely and simply a disaster. You don’t buy it, can’t believe it — it doesn’t come close to touching bottom.

The bottom line is that you feel burned and betrayed by the decision to sell out Gekko’s character. You’re with him, you feel for him somewhat, you half-sympathize…and then the filmmakers pull the rug out.

There’s a bit between Douglas and Charlie Sheen at a swanky New York party that gets a rise, but — again –it’s a capitulation to the lore of the ’87 film. The filmmakers didn’t believe or invest in what the new film could have been entirely on its own merits and cultural groundings.

Otherwise WS2 handles itself pretty well. It’s over-emphasizes certain plot points and emotions — it’s overly explicit, playing to the gallery — but the observations about the nature of high finance these days and how it’s all been twisted and corrupted beyond belief or control are spot-on. It’s a reasonably decent film in many respects, but…well, I’ve said it.