It was decided at last night’s La Pizza gathering that Quentin Dupieux‘s Rubber, an 85-minute film about a killer tire with psychic powers, is probably worth seeing. It’ll be shown here as a special Critics’ Week screening (La Semaine de la Critique) sometime soon. Just don’t ask me to supply the date, time and location. I got enough aggravation. 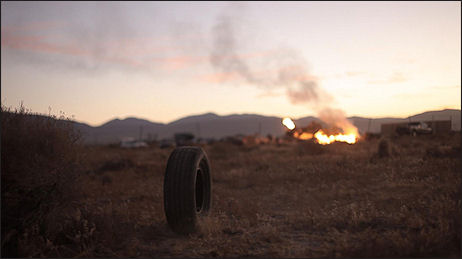 “I’m still na√Øve enough to believe that there is still room for unconscious and format-free films,” Dupieux says. “The too formatted films, structured as emotional machines, annoy me. I like the idea of doing a film on a living tire, with no narrative structure nor dramatic stakes. It’s possible!

“Rubber is the story of a serial killer tire that refers to his youth: Around the age of 12, my father’s video camera made me feel like filming. Then I discovered horror movies in video clubs and I instinctively needed to remake some fragments at home. And why a tire? I can’t answer questions starting by why. Life is full of mysteries. Why don’t we see the air around us? Why a tire? This is the same question.”