Delivering an opinionated shocker that no one could have seen coming, Marshall Fine declares that Sex and the City 2 “is not very much” and that it “rarely made me laugh. And at two hours and 23 minutes, that’s a lot of not laughing.” 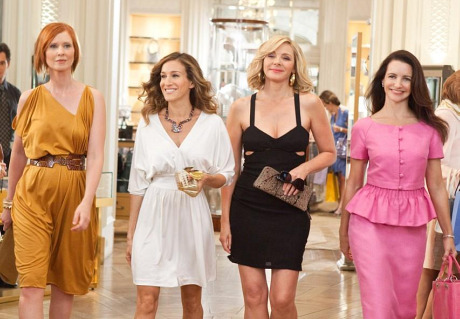 143 minutes? Who’s running the store at New Line/Warner Bros.? If I was the top hot dog I’d politely explain to director Michael Patrick King that he can use whatever unfunny horseshit that strikes his fancy, but come hell or high water SATC2 won’t run any longer that 110 to 112 minutes, tops. No discussions….finito.

“At the screening I attended, which was more than 50 percent women, the moments of actual out-loud laughter could be counted on one hand,” Fine remarks. “The verbal grumbles about the clothes or the lameness of the jokes outnumbered the expressions of mirth.”

“The first SATC film was such a downbeat snooze that one assumed it couldn’t get worse. But it can and it does.

“The most controversial this film gets is when Samantha (Kim Cattrall) gets arrested for publicly kissing a man she’s just met and incidentally aroused so that his cotton drawstring pants reveal an erection when he stands up in a restaurant — a guaranteed laugh-getter.

“Is this film offensive to Islam? These days, what isn’t? Muslims are touchier than the Catholics. It’s a Sex and the City movie set in an Arab country. Of course, it’s going to be offensive to Muslims! The title is offensive to fundamentalist Muslims.”

On top of which “the sour taste of conspicuous consumption is unmitigated by a couple of lines about how bad the economy is, [which are] obvious attempts at vaccinating this film against charges of tasteless irrelevance.

“If the women of Sex and the City 2 were to ever actually engage with the real world, it might cause a rift in the space-time continuum that would doom us all.”