Survival of the Fittest

It’s truly heartening to read an estimate from Russ Collins, co-chair of the Sundance Institute’s Art House Project, that “there are at least 500 independent community-based art house theaters in the U.S.” I had no idea. I thought there were maybe 150 or so, if that. It’s also encouraging to hear Collins say that “there may even be thousands,” and that “there will be more and more every year because film is arguably the most important art form created in the 20th century.” 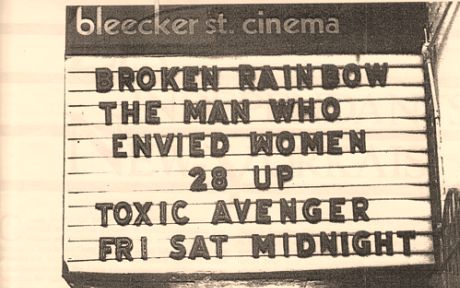 Marquee for Manhattan’s Bleecker Street Cinema, which showed classic or avant-garde fare from ’62 to ’90.

Collins is quoted in an Inside Indies piece by Elizabeth Meyer. The articles features an interactive map showing where many of these theatres operate, and containing links to theri websites.

The Sundance Art-House Project is “a national partnership working to build audiences and develop a community of theater owners committed to independent film,” Meyer writes. “To date, 12 theaters around the U.S. have been selected for the Art House Project, a major perk of which is having exclusive access to films from the Sundance Film Festival.” Most of these houses exist as not-for-profit operations, and are always on the hunt for corporate grants and other sources of cash.

I come from the world of repertory cinemas, which were all about showing older (or in some instances recent) classic films. Rep houses began to wither and die in the late ’80s or thereabouts, and have been pretty much extinct for the last 15 years, give or take.

My first movie-realm job was working part-time for the Westport Playhouse Cinema starting in ’75. I also worked as a manager at the Carnegie Hall Cinema in ’78. My employer was the incontestably colorful Sid Geffen, a bespectacled real-estate maven with a French-born wife (filmmaker Jackie Raynal) who had bought the Bleecker Street cinema in ’74 or thereabouts, and was also leasing (I think) the Carnegie Hall Cinema, and showing classic films in both.

I’m sorry to report that this was only pic I could find of the late Sid Geffen, the former Manhattan rep-house enterpeneur, born troublemaker and indefatigable “character” in the mold of Sydney Skolsky, Samuel Arkoff and other cigar-chomping showbiz types (although Sid never touched cigars).

Sid fired me from the manager job for putting the ticket roll into the dispensing machine backwards, necessitating a new form of arithmetic in counting the grosses. But then he re-hired me in the spring of ’79 to be the managing editor of the Thousand Eyes Cinema Guide magazine, a kind of TV Guide-styled monthly. This was when there were plenty of Manhattan repertory cinemas to keep track of — the Thalia, the Bleecker, the Carnegie, Karen Cooper’s Film Forum, another one that Dan Talbot ran on the Upper West Side, Theatre 80 Stl Marks, the Collective for Living Cinema, etc.

Putting out the issues was insane. Paper and glue and typefaces and printing presses, and staying up all night checking proofs and re-writing and re-editing. But we had first-rate writers penning articles — Harlan Jacobson, Jonathan Rosenbaum, David Sterritt, Gary Indiana, Annette Insdorf — and we published, I think, four issues before Sid folded it. He was paying for the whole operation out of pocket, and just got tired of the costs without any ad revenue to speak of.

The best thing that happened for the Thousand Eyes p.r.-wise was David Denby, then the New York film critic, giving the magazine a nice three-paragraph plug at the end of one of his columns.

Repertory cinema was strictly a Manhattan realm back then. Everything of any value happened in Manhattan. Nobody even thought about Brooklyn, much less entertained notions of taking a train there. I lived in Manhattan from ’77 to ’83, and I never once visited Brooklyn or Queens (except for Mets games) or the Bronx (except for Yankee games) or Staten Island during my whole six years there.