I caught all but the first 20 minutes of last night’s MTV Movie Awards, and was stunned by the absence of even half-funny material throughout most of it. The show’s popularity derives from its blatant goof-off attitude and being 100% opposed to the idea of movie theatres as churches. Movies are presented instead as things you might watch on your iPhone while farting and belching during a McDonalds break. So you’d think that at least some of the routines would be at least chuckle-worthy, except almost nothing worked. 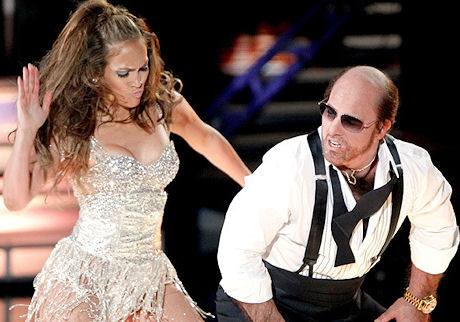 With the exception of Tom Cruise‘s Les Grossman dance number with Jennifer Lopez and Jonah Hill and Russell Brand‘s make-out session in the seats, pretty much every line and routine had a “that’s it?” quality. Nobody seemed to have the slightest clue. Time and again the show stalled and sputtered.

I said to my son Dylan, “Is it me or is almost nothing on this show even remotely funny? I mean, I’m sitting here frowning.”

It doesn’t seem to have occured to anyone (least of all the writers) that low-road wallowing is never funny unless fortified by exceptional wit, smarts, sophistication. Or political subversiveness. Or some display of outrageous, never-seen-before vulgarity or razzle-dazzle (like the Cruise-Lopez routine). Instead the show was mostly an assemblage of glittery ca-ca moments.

Will Ferrell and Mark Wahlberg dangling from wires and bitching about how it didn’t feel cool enough?

It would have been nice — change-of-pace classy — if “Best Kiss” winners Kristen Stewart and Robert Pattinson had simply kissed in the classic tradition. But no — they had to go with a tiresome routine about Pattinson being too clumsy to pull if off. It was awful. This plus Stewart’s cowardice over the rape remark has lowered her stock considerably.

Bradley Cooper‘s witless blathering-on as he introduced special honoree Sandra Bullock (particularly the beaming look in his eyes as he spoke of the $163 million earned by The Proposal) persuaded me that he’s a giddy and fizzy-souled showbiz whore. I began to admire Cooper after seeing him in The Hangover, but I’m off the boat now. His stupidly grinning puss had the exact opposite effect that Ben Stiller‘s Oscar show routines (the Na’vi thing, the ’09 Joaquin Phoenix parody, that great bit he did years ago with Owen Wilson) have had — i.e., he gets it, he’s cool.

And in the middle of all this Ken Jeong (The Hangover), while accepting the Best WTF Moment award, starts crying about his wife having dodged cancer? Now I’ve got a handle on the guy — he has the soul of an owner of a Monterey Park Chinese food restaurant who drives a big car and lives in a tract house.

Okay, the Jeong-Ed Helms Elton John routine wasn’t too bad. Christina Aquilera‘s light-up crotch was striking. And I was mildly aroused by the trailer for Harry Potter and the Deathly Hallows.

New Moon was named Best Movie, and Stewart won the Best Female Performance award for sleepwalking through it? The emptiest Eloi GenY girls would have trouble with those calls. And Zach Galifianakis won the Best Comedic Performance for playing an all-but-diaper-wearing retard in The Hangover when the general consensus is that Ed Helms’ performance stole it?