So The A-Team cost about $100 million to produce (according to L.A. Times / “Company Town” reporter Ben Fritz) and God knows how much in marketing costs ($40 or $45 million?). And yesterday’s news that it’s likely to end up with a lousy $26 million this weekend constitutes a “soft but not terrible” opening, according to Fritz. 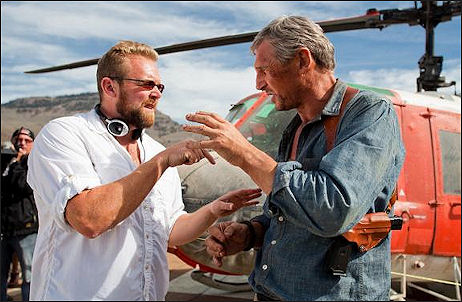 Okay, so what figure would be considered terrible? Weren’t handicappers figuring it would at least top $30 million? It sure seems like a crash-and-burn to me.

If Joe Carnahan‘s film triples the first-weekend gross it’ll end up with a bit more than $75 million domestic, but will word-of-mouth be strong enough to ensure this? I doubt it. What was the after-vibe with paying audiences? Pure-guy movies always seem to hit the same ceiling of under $100 million.

The Karate Kid, which particular people don’t want to know about, was the big winner with $56 million on 3,663 screens or situations, obviously kicking the A-Team‘s ass to the curb.

The mostly awful A-Team reviews had nothing to do with this, I’m guessing. It just looked too extreme-cartoon and stupidly violent and blowhardy to too many people, I’m presuming. There’s also the possibility that people shared my reaction to Bradley Cooper on last weekend’s MTV Awards and said, “Look at that too-jolly, overly-beaming gladhander…I’m not going to The A-Team as a vote of protest about his personality.”