I didn’t want to buy Criterion’s recently released Bluray of John Ford‘s Stagecoach (1939). I suspected the worst — something un-finessed and scratched and speckled and lousy with grain — and knew it would probably rub me the wrong way. But I went down to Kim’s last night and bought a copy anyway — over $30 bills! — and took it home and popped it in. And holey moley, it looks even worse than anticipated. 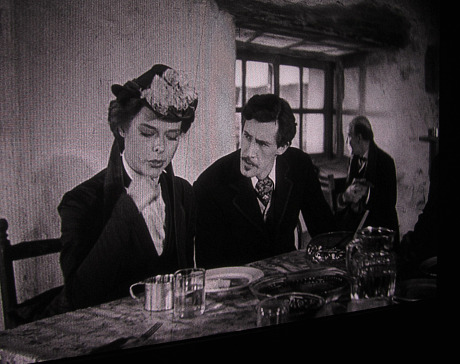 It may sound extreme to call this an awful Bluray with others giving it a thumbs-up, but I’ll go one better: this is the worst-looking, worst-sounding Bluray of a classic black-and-white film in history. That means, obviously, that it looks worse than Criterion’s notorious Bluray of Carol Reed‘s The Third Man, and that’s saying something, fella.

The reason is simple. The Criterion monks used a 1942 nitrate duplicate negative that had squawky sound and titanic grain levels plus all kinds of smudges and wounds and scratches, and then went by their usual creed, which is that “whenever the damage [is] not fixable without leaving traces of our restoration work, we elect to leave the original damage.” Which has resulted in one of the biggest burns in Bluray history. And then these fuckers turn around and charge retail-schmuck purchasers like myself (i.e., guys who are too lazy or impulsive to use cheaper online options) over $30 bucks. Well, gee…thanks, Criterion!

I’m recognizing that Criterion “removed the worst of the damage” by committing “hundreds of hours of restoration work,” but for their brochure-writing spokesperson to say that “certain defects remain” in the finished Stagecoach Bluray is like a BP spokesperson claiming that there’s a little bit of mucky-muck in the Gulf of Mexico right now.

I was watching it last night and going, “This is ridiculous.” I mean, I was really seething — furious that they hadn’t tried to refine the detritus and the scratches and the Iraqi sandstorm effects at least a little bit. Don’t listen to the purists who say that any kind of digital refinement or clean-up will turn an old movie into a scrubbed- down video game. The people who say this are agenda-spinners, plain and simple. You know what I mean by this. I’m basically saying they’re dishonest.

I’ve said over and over that there are acceptable halfway measures that can remove the offensive stuff without making the actors look as if they’ve got plastic mannequin faces. 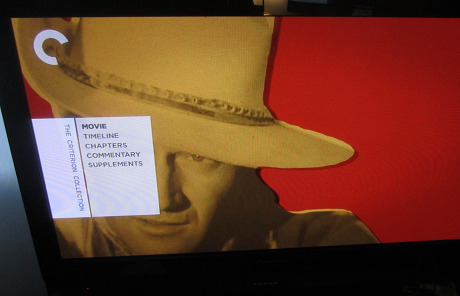 I wrote a few weeks ago that the Criterion Co. is “the ultimate blue-chip outfit — far and away the most trustworthy providers of true quality in home video. They do what they do with considerable expertise and devotion. It’s just this Abbey-of-St.-Martin monk strain in their thinking. They do great work in general, yes, but they’d rather have films look like what they looked like when they came out rather than have them look so good today that their directors would hear about them in Heaven and have angel erections.”

Well, the latter part of that paragraph was wrong — the Stagecoach Bluray makes the film look worse than it must have appeared when it had just opened and was playing in first-run theatres in New York and Los Angeles. It looks like Stagecoach probably looked in a dinky little theatre in Barstow, California, after it had been playing for six or seven weeks through a dusty gate. I’m speaking as a formerly licensed projectionist so I don’t want to hear any shit about this from anyone.

I feel used and abused by Criterion. Snookered, ass-fucked, film-flammed, hoodwinked, boondoggled…a tin can tied to my tail.