I knew less than ten minutes into last night’s screening of Get Him To The Greek (Universal, 6.4) that it was funnier, smarter and far less irritating than Forgetting Sarah Marshall , director Nicholas Stoller‘s previous film (which was ruined by the galumphy Jason Segel, or more precisely by his pathetic first-act nude scene). So I guess I’ll have to re-think Stoller, whom I’d previously dismissed on the basis of Segel’s performance and casting, even.

Maybe I’ve been kicked and beaten down by too many moronic comedies, but I knew from the start that this was at least a couple of cuts above. It’s crude and outrageous at times, and it’s also a fairly dry, moderately deadpan, naturalistically-performed satire of music industry mores.

It’s also a 21st Century remake of My Favorite Year, with Russell Brand as a debauched-rock-star version of Peter OToole, and Jonah Hill as Mark Linn-Baker‘s Benjy Stone character.

And it has two…make that three chuckle-worthy performances from Hill, Brand and P. Poppa-Diddy-Pop Sean Combs. I never really “laughed,” but I’m not much of a hah-hah responder when I see comedies. I’m more of a heh-heh type, or a type that guffaws or half-grins and says to himself “that’s funny” without making a big show of it.

I was again reminded of what a moderately cool, moderately funny movie this was when I awoke from an hour-long snooze and caught the last 30 minutes’ worth. Okay, I realize that sounds highly suspect but please let me explain.

My slipping under the waves had nothing to do with Greek’s quality; it was due to lingering jet-lag. I succumbed under great duress and protest, in fact, knowing that I’d be missing something that was obviously working pretty well. I was placated, I supposed, by the realization that I don’t need to see an entire film to know if it’s good or bad or in-between. I can tell with ten minutes, and sometimes within five. Same thing with a script — good or bad, you know the deal by the time you’ve hit page ten.

I intend to somehow catch it again before Friday’s debut, or just pay to see it this weekend. Update: Seeing it again Thursday night at the AMC 34th Street.

Go ahead and attack me for writing a favorable review of a film that I missed 60% of, but who’s calling this a review? It’s simply an honest account of what happened, and what my gut and my head (however befogged by slumber) told me as I tried to avoid the lures of Mr. Sandman. 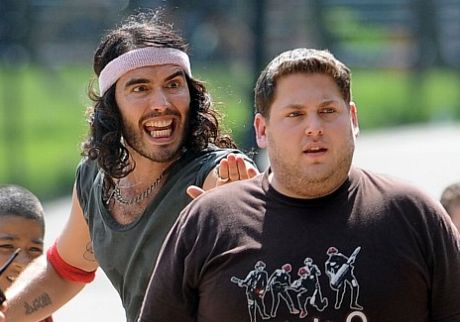 Okay, so I lost the battle, but one of the reasons I gave in is that I’ve learned that it’s better not to fight the urge. Give in, surrender and when you return to consciousness 10 or 12 or 15 minutes later you’ll understand and appreciate the film you were trying to watch all the more. Last night’s problem was going under for a whole damn hour, which I’ve never done before.

Get Him To The Greek is being described as a semi-sequel to Forgetting Sarah Marshall because Brand is playing the same preening jerkoff he was in that Hawaiian-based film — a giant-boned, spindly-limbed British rocker named Alduous Snow.

Everyone knows the basic Greek drill, I presume, about Hill’s character, who works for Combs’ record company, suggesting in an office meeting that Snow, a self-destructive, once-hugely-popular performer, should be booked into doing a concert at L.A.’s Greek theatre as a celebration of a legendary Snow/Greek concert that happened in 2000. Hill is assigned to go to England and “mindfuck” Snow into some kind of malleable state so that he shows up for the concert in a sober (or at least perform-worthy) state of mind, and if you’ve seen My Favorite Year (directed by Richard Benjamin, released in ’82) you know the rest

I probably just should sit through this thing again — no snoozing! — and then write Part 2.

I can at least reiterate something I’ve said before, which is that Hill’s size has become a real problem — fat guys are funny but morbid obesity is an ailment that will stop your life cold. Hill is so ballooned-out that I had real trouble believing that he’d have any kind of girlfriend, much less one as fetching as Elizabeth Moss.