In a just-posted piece about the critical firestorm that last weekend greeted Sex and the City 2, N.Y. Times critic Manohla Dargis suggests that Hollywood.com critic Thomas Leupp owns the idea that SATC2 might inspire anti-American terrorist acts. “It could become an effective inspirational video for suicide bombers,” Leupp wrote, “provided they can endure the film’s two-and-a-half hour running time, of course.” 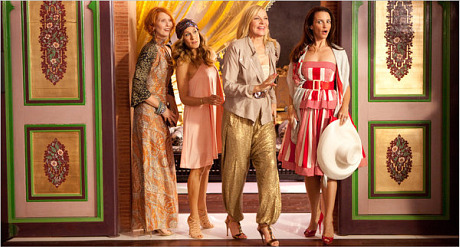 Leupp may have been the first critic to express this, Dargis implies, or was the most articulate or noteworthy…whatever. But for one reason or another she chose his quote to represent this view, so draw your own conclusions.

My own, for what it’s worth, is that Dargis doesn’t respect HE like she could or should. Because I was first to plant a flag on the SATC-terrorism thing.

Way back on May 28, 2008, after seeing Sex and the City: The Movie at a commercial Paris cinema, I called it “another Taliban recruitment film.” In a followup piece I suggested that “young Arab men might be so repelled by its celebration of putrid 21st Century chick culture that joining the Taliban might seem freshly appealing.”

Now, you can surmise that I wasn’t quoted because my “Taliban recruitment film” remark wasn’t written in response to SATC2, the focus of Dargis’s article. But of course, the same content that everyone is responding to in the current film was also stinking up the place in ’08’s SATC: The Movie. The fact that the girls travel to Morocco-disguised-as-Abu Dhabi in the newbie is a mere geographical anecdote. The spiritual cancer at the heart of the SATC franchise was just as pernicious two years ago as it is today…c’mon. Both films were sired by the same seed.

All of which suggests that Leupp may be enjoying his moment in the N.Y. Times sun because I was too far ahead of the pack. Forget The Man Who Knew Too Much (also partly shot in Morocco) and consider The Man Who Spoke Too Soon.