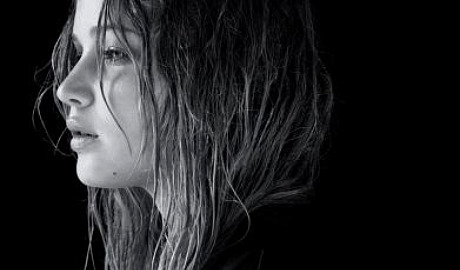 “Lights go down, movie starts up and I’m sitting there watching it, and out rolls this backwoods teenaged girl with puffy cheeks, and at first I’m like, er, ‘Wait a minute, is this the new Megan Fox I paid 16 bucks to see in person? It’s like some rural chick in acid-washed jeans or something. Shouldn’t she be glazed in an orange sheen and bent over a motorcycle?’

“But the movie goes on, and seriously, no joke, you are watching the absolute real-deal, star-of-tomorrow, ‘holy shit is this chick incredible?’ performance of 2010! From two minutes in, I forgot I was supposed to be checking out some new hyped It Girl, and was just riveted by the movie’s no-bullshit milieu and integrity and gritty, tense undercurrent with Lawrence rolling through every scene like a dogged, reluctant investigator a la Gone Baby Gone or Cutter’s Way but transplanted to the dour, drab, blue-sheened backwoods world of Missouri meth cooks and scary associates.

“Ultimately, the movie probably succeeds more as a mood piece, character study, and a strong woman’s vehicle than as a 1-2-3 connect-the-dots potboiler. It’s one of those movies where you’re there in the moment from the jump, then around the 85-minute mark it dawns on you that the ‘plot’ specifics aren’t going to be resolved and half the threads unravel into vagueries. But Jennifer Lawrence is a force of nature in it.

“So the end credits roll, lights come up, and by now I’m expecting this chipmunk-cheeked, unassuming bad-ass underaged avenger chick from the movie. Out rolls Pete Hammond to run the q & a. First out of the gate is Dale Dickey, who is incredible as the Lady MacBeth-y Merab in the movie, and who some may remember from her white-trash turns in Domino and Breaking Bad. Cool actress, mega-talented.

“Then out comes the lanky, statuesque Lawrence in a purply ruffled top and jeans, and (yes!) giant high heels with her cute toes poking out. A Star is Born, people! Not remotely the naturaltough-chick hero from the movie, but a genuine movie star who captivates from the get-go, answering questions and generally being awesome.

“This was one of the rare times in life I wish I had an actual good phone instead of a 2002 7-11 pay-as-you-go phone, or I’d have some pics of this stunning, A-list-ready, ‘next big thing’ pro a mere twenty feet away. No idea why her likely most-seen credit thus far has been The Bill Engvall Show because we’re talking mega-stardom on the horizon.

“Hammond and the audience asked some pretty straightforward questions about…. about…something. Like where Lawrence and Dickey grew up (both in the South), their process, rehearsals, who in the cast was a real actor and who were locals (big tip o’ the hat to the audience member who apparently thought veteran actor John Hawkes from Deadwood and Miami Vice was just some local yokel.

“Nothing particularly revolutionary was revealed by either actress, although I liked it when J-Law said she liked to be “bossed around” (hot), and that her M.O. is dependant on the other actor in terms of whether they like lots of rehearsal, or to keep it loose and natural on set. But it was obvious that Lawrence is charming beyond all belief and is set to be a major, major, major star.

“The sea of difference between Lawrence’s Ozark movie and this stunning vision fielding questions with grace, self-deprecation and magnetism speaks well to her amazing acting prowess. Bet on it — instant contender for Best Actress at the Oscars.”