I saw and reviewed Animal Kingdom (Sony Classics, 8.10) at Sundance 2010, except I can’t find the link. The first reports about it being an Australian At Close Range were partly right, but it has its own kind of malice, easy and neighborly-like. The Codys, a drug-dealing crime family, don’t act or look the “part” but you can’t help but believe — trust — that they’re quite dangerous when push comes to shove, or when they slip into a foul mood. 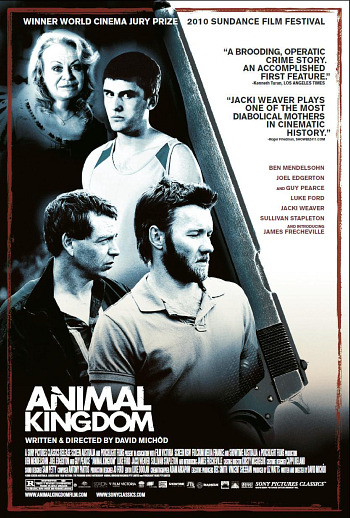 Two characters are especially chilling — Ben Mendelsohn‘s “Pope” Cody and Jacki Weaver‘s Janine Cody — a Lady Macbeth to be watched very carefully. The only soft spot in the film is the young lead, James Frecheville, who has a way of convincing you that his character, Josh Cody, is on the slow side. He just has that “duhhhh” look in his eyes.