Two or three days ago Ken Russell‘s controversial, long-submerged, curiously-delayed The Devils (1971) turned up on iTunes for sale or rental. This got a little attention in the online press, and then last night….phffft! Yanked, one assumes, by some bigwig at Warner Home Video who hadn’t realized that the digital distribution guys had made it available, or something like that. 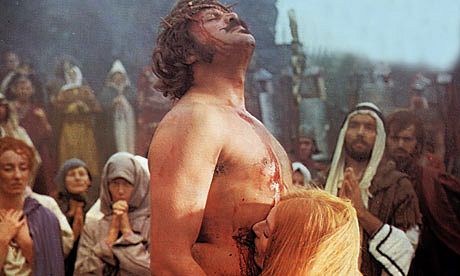 This morning I asked a WHV spokesperson to explain this strange turnaround.

“Please help me regarding the issue of The Devils being put on iTunes for a day or two or three and then hastily withdrawn,” I wrote. “This is the second time that The Devils has been put before the public and then withdrawn — the first time in early ’08 when a Devils DVD release was announced and then un-announced, and now with the movie having been recently made available for download and then suddenly withdrawn.

“What in the name of Christ is going on with Warner Bros. and this title?

“I can guess but with this second incident I really do think Warner Bros. owes the intelligent viewing public a frank explanation. This is a highly respected film and arguably Ken Russell‘s greatest, and after going to the trouble of digitally remastering it for distribution (it looked beautiful on my iPhone when I watched it the night before last) Warner Home Video is once again treating it like some kind of ugly hot potato.

“And it’s not right. You know it isn’t. It’s disrespectful and, forgive me, cowardly if, as some suspect, WB is in convulsions about the film because it has the potential to offend the religious right. I have to report about this now because it just happened, but it really is time to explain what is behind all this Warner Bros. weirdness about The Devils. 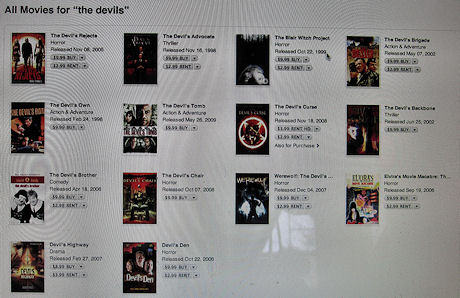 Do a search for Devils on iTunes movies and this is what comes up. A day or two ago Ken Russell’s The Devils was one of the offerings. I made the mistake of renting it instead of buying. Now I’m out of luck.

“I’ve been told that certain studio guidelines have to be observed, etc. And that’s fine, but what about the studio guideline that says when you issue a press release saying a DVD is coming out, you issue the DVD commercially — no ifs, ands or buts. Or the studio guideline that says when you make a Warner Bros. film available for purchase or rental on iTunes, you make it available for a year or three years or indefinitely but you sure as hell don’t remove it from iTunes after three days?”

Here’s a 3.29.10 article I wrote about the perplexing Warner Home Video Devils DVD situation. And here’s a 5.26.10 article on the same subject by Adam Balz on Not Coming To A Theatre Near You.