The second an actor of any age turns up in a film wearing sandals or flip-flops, he’s dead to me. And the film has cast a shadow upon itself. I don’t want to know from men’s feet, especially if they’re somewhat older with a bad pedicure. In movies or real life, I mean. I could do, in fact, with a lot of women who wear sandals not wearing them. Bare feet are generally a problem all around. My grandmother used to tell me this when I was seven or eight. 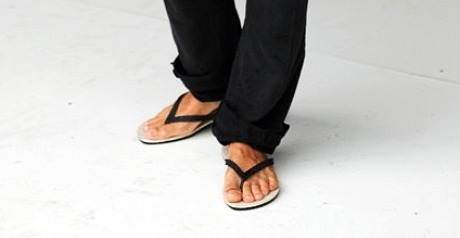 The only way the sandal/flip-flop rule doesn’t apply is if the film is set in ancient times.

I remember a scene in Backdraft when Billy Baldwin showed up in flip-flops, and I went, “All right, that’s it, he’s done….and not just in this film. His entire career might be in jeopardy.” That’s all it took! There’s a scene in Miami Vice in which Colin Farrell is wearing sandals while sitting at a kitchen table, and while I was down with the fumes in this film (along with Gong Li) the sight of Farrell’s digits gave me the shudders.

I’ll tolerate bare feet around pools and beaches for short periods, but sandals of just about any kind are killers. This is one of my biggest problems with 30-something and 20-something guys in the summer. They love their damn sandals. I’m already thinking of my worst nightmare — four heavy-set 20something guys sitting next to me at a cafe as I try to file, and howling with laughter at each other’s jokes.

I’m assuming that I’ve tapped into something universal here.