The frame captures in Gary Tooze‘s review of the WHV Bluray of George Cukor‘s A Star Is Born (1954) underline what I said a couple of months ago, which is that the film doesn’t really work because Judy Garland looked way too old to play an ingenue, even a late-blooming one. 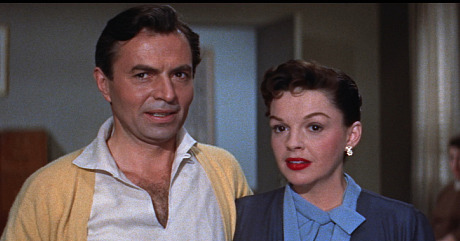 In the pic above the 31 or 32 year-old Garland arguably looks a bit older (and certainly no younger) than costar James Mason, who was born in May 1909 and was 43 or 44 during shooting. Look at her! She could be 45 or 46, certainly by today’s standards. And it’s the Bluray detail, I gather, that’s exposing this for the first time.

As I noted in April, Garland’s Esther Blodgett “looks stressed, worn down and plain with a too-short haircut and her chin starting to disappear — there’s a straight line between the tip of her chin and the base of her neck. Garland herself was clearly a wreck at a relatively young age. She’d lived a tough life up that point, and it didn’t get any more peaceful. She died in 1969 at age 47 — barely into middle age.”

I said before that Garland’s Blodgett “looks like a 39 year-old New Jersey housewife who’s taken too much speed and sipped too many Manhattans.” I misspoke. The women on Real Housewives of New Jersey, most of whom are in their early to late ’40s, look younger, hotter, spunkier. Don’t agree? It’s at least a debatable point.

Below is a slightly more flattering frame capture. Garland had perhaps gotten some extra sleep the night before or had been cutting down on the pills. But by today’s standards she could be 38 or 39. (Aging doesn’t happen today like it used to.) There’s certainly no way you can buy her as a 25 year-old, which I think is what Blodgett was supposed to be. Not fresh out of high school but not that far along either.

And look, by the way, at that 1954 WarnerColor widescreen texture. Almost a Georges Seurrat pointillist painting. Tooze says “the new transfer shows grain…film textures exist in some scenes more than others.” Naturally. I’m not hating on the prospect at all. 1950s color is what it is, or was — but this still does seem to give you an idea of what this forthcoming Bluray (due on 6.22) might be like. 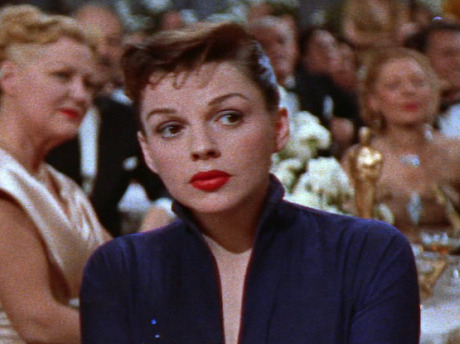