Mainstream media and online jackals reacted adversely yesterday to Kristen Stewart‘s comment, included in an interview with British Elle‘s Claire Matthiae, that being hunted down, surrounded and flash-bulbed by paparazzi is a little like being raped. 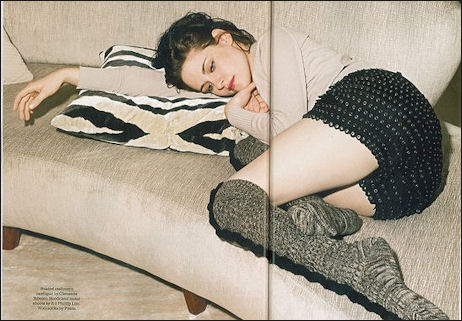 Kristen Strewart in a British Elle snap used to accompany the interview.

In the print version of his story, N.Y. Daily News writer Anthony Benigno quoted an online ranter who called Stewart’s remarks “ignorant and insensitive,” and added that she should “apologize to rape victims.”

Why should Stewart apologize? Paparazzi are hit-and-run rapists of a sort, and being obliged to surrender little slivers of your soul as your picture is taken hundreds or thousands of times by a pack of shouting wolves is a kind of personal mauling that isn’t far from my understanding of “rape” — to be invaded and occupied and suffer a kind of brutal violation or wounding or theft, be it physical or emotional.

The people dissing Stewart are insisting, idiotically, that “rape” be defined as only a sexual violation. I’ll bet twenty bucks that most of these complainers aren’t very well educated.

I felt raped once when I came home to a Paris apartment I’d been staying in and realized it had been broken into and everything taken, including a new can of American-brand shaving cream that heated up when it came out of the can. I really loved that stuff, and those frog mo’fos stole it! I was enraged, and realized in an instant that this is probably a taste of what being physically raped feels like. Sexual violation is obviously many times more bruising and traumatic, but I know what I felt when I saw that apartment door ajar and my bathroom cabinet ransacked.

“The photos are so…I feel like I’m looking at someone being raped,” Stewart tells Matthiae. “A lot of the time I can’t handle it. What you don’t see are the cameras shoved in my face and the bizarre intrusive questions being asked, or the people falling over themselves, screaming and taunting to get a reaction. All you see is an actor or a celebrity lit up by a flash..it’s fucked. I never expected that this would be my life.’