As L.A. Times columnist Patrick Goldstein has reported, producer Cotty Chubb is delighted that Unthinkable, a torture-the-terrorist melodrama with Samuel L. Jackson, Michael Sheen and Carrie Ann Moss, is the hottest flick of the moment in terms of searches by IMDB users, but also pissed and flabbergasted that a stolen copy of the film has been watched illegally by God-knows-how-many-thousands since it appeared last month.

DVDs and Blurays of Unthinkable are purchasable online and in stores today, but did the scumbag community (pirates and downloaders alike) wound the goose before it was hatched? Or will the online exposure led to increased DVD/Bluray sales?

The usual response is to claim that the scurvies who illegally download movies are never going to pay for a DVD/Bluray — it’s just not in their blood — but a film that’s become a hot topic due to online exposure will sometimes benefit when it becomes legally available. But has this ever been statistically proven or indicated? Did Michael Moore‘s decision to release Sicko for free result in better-than-expected home video sales? I’m asking.

“I always saw [Unthinkable] as a ticking-bomb movie,” Chubb tells Goldstein. “The one time we previewed it in Pasadena, positioning it as a suspense picture starring Sam Jackson, basically saying, ‘How far would you go to defend your country?’ we recruited 350 people and turned away another 250 at the theater. That told me it was a picture people would go to see.”

“So I’ve been unbelievably torn over the whole thing. It’s tremendous to see that our IMDB user rating is 7.3, which is the highest rating of any movies in the current Top 10. But on the other hand, while everyone is debating all these important moral questions, I want to ask them another important question — hey, guys, what about the morality of watching this movie on the internet for free? 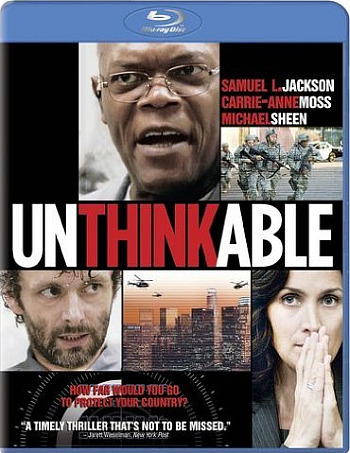 Goldstein includes a condensed version of a statement Chubb made on the IMDB message board:

“I’ve heard a lot of reasons why streaming or downloading movies is a good idea, why everyone concerned should be happy with the attention (and in fact I am grateful for it), and how it’s the new real world, but I haven’t heard how the folks that paid for the picture are supposed to make their money back.

“So here’s one question, expressed a couple of different ways: Is there a fair price, fair in your eyes, that you would pay for a download? ‘Hey, take a chance, it’s only a buck?’ ‘People tell me it’s great, I’ll drop two bucks?’ ‘Here’s three bucks, I can afford it and it’s only fair?’ What number seems right to you? ‘Or is it ‘zero, screw it, I don’t care?'”

“We’ve got to come up with a new model, because the old one just isn’t working anymore,” Chubb concludes. “You just can’t fight against a model where the movie is available for free. People clearly want to download movies online, so it’s time we figured out how to get some money out of it.”