There’s usually one Best Actress Oscar nominee every year who receives attention as the token newcomer — someone relatively fresh and young like last year’s Gabourey Sidibe or Carey Mulligan. 2010 has another six months to go (duhhh), but there’s a feeling right now that Jennifer Lawrence‘s performance as a determined Ozark teenager in Winter’s Bone — a young woman of exceptional steel — has a better-than-reasonable shot at landing a Best Actress nomination seven months hence. 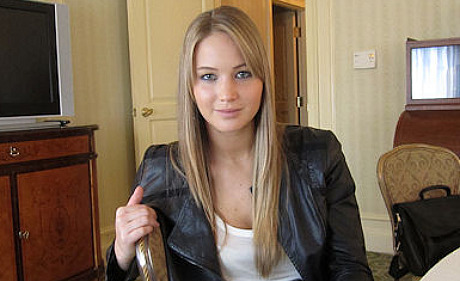 Applauding acting talent is the basic criterion, of course, but nominating young actresses for an Oscar tends to be about values — about the Academy’s approval and respect for the characters they play. Mulligan’s Jenny, the lead in An Education, was celebrated for being plucky, spirited and eager for cultivated experience; Sidibe’s performance in Precious was embraced because she played such a hopeless, put-upon sad sack — obese, AIDS-afflicted, Downs Syndrome baby — that everyone (except Mo’Nique‘s Mary) wanted to comfort her.

Lawrence’s character, a 17 year-old named Ree Dolly, is about intestinal fortitude . Her goal in Winter’s Bone is to find her character-deficient criminal dad who put the family’s backwood home up for his bail bond and then skipped. If he stays gone Ree and her family will be homeless. The film is basically about Ree asking questions of several grungy Ozarkians — where is he?, you know anything?, just trying to care for my family. They all lie, glare, threaten, stare her down and dance around the truth, but she won’t back off. Ree is strong and unafraid, which you can’t help but admire.

Which is why she’s looking good for a nomination. We all want our kids to be tough and determined, and celebrating such a character will be a way of saying “see? This is what we’re talking about…life isn’t easy and you have to show a little mettle.”

On top of which Lawrence is damn good in the role — clearly, obviously. There’s also the fact that Lawrence is (please forgive) hot stuff, and voting for her will be a way for Academy geezer types (i.e., the Lorenzo Semple, Jr. types) to keep their hand in, so to speak.

I’ve been asked by two publicists why I haven’t posted an mp3 of my Lawrence interview. It’s because I made the mistake of recording it with an iPhone app called iRecorder, which is a huge pain in the ass in terms of uploading sound files onto my hard drive, and which rebuffs all attempts by Wavepad, my audio-manipulation software, to permit the files to be converted into mp3. I just gave up after an hour or so of messing with it, and for whatever reason I didn’t record my Lawrence chart on video.

Winter’s Bone is straight, sturdy, “real.” But my primary thought after catching it at last January’s Sundance Film Festival was that I’m glad I wasn’t born to poor white Ozark trash — a fate equal to the one that befell poor Precious, or worse? — and that I’d be grateful if the Emperor of the Universe told me I’ll never visit this region ever again for the rest of my life. In actuality, I mean.

I spoke to a 20-something lady at a recent Knight and Day screening who’d seen Winter’s Bone and didn’t like it because of the cruelty shown to Lawrence’s character, and because of the general Ozarkian scuzziness. I said “okay, I hear you, but Jennifer Lawrence…” And she finished my sentence before I got the words out: “Oh, I know, she’s great! Totally.”

It’s not a rumor — twentysomething women really do have a thing for the word “totally.” They use it a lot.

June 19, 2010by Jeffrey Wells58 Comments
« Previous post
Top Contenders at Half-Time
Next post »
Righties Are Same All Over