Vanity Fair.com‘s Laura Jane Estes has written a summary of David Brinkley‘s VF article (appearing in the July issue) about Sean Penn‘s Haitian humanitarian camp-down. “If it looks as though Sean Penn is just another Hollywood star courting headlines with a camera-ready cause, look again,” Estes begins.

“With a midlife milestone looming (Penn turns 50 in August), his marriage to Robin Wright Penn seemingly finished (‘She is a ghost to me now,’ he observes), and a teenage son, Hopper, having recovered from a life-threatening skateboard accident, the Oscar-winning actor decided to redirect his focus and his priorities.

“Instead of shooting another film or hawking his latest (Fair Game, in which he portrays Ambassador Joseph Wilson, playing opposite Naomi Watts as ‘outed’ C.I.A. agent Valerie Plame), Penn ended up committing himself to the people of Petionville, a once-affluent Haitian suburb where he now runs a camp for 50,000 displaced earthquake survivors.

“As Vanity Fair‘s July issue reveals in detail for the first time, a week after the quake hit last January — killing an estimated quarter of a million people — Penn, a longtime political activist, joined forces with L.A.-based, Sarajevo-born philanthropist Diana Jenkins (creating the humanitarian organization J/P HRO), lined up crisis veteran Alison Thompson to assist in recruiting an A-team of relief volunteers, and flew from his home in Malibu to a ravaged hillside in Port-au-Prince — with a dozen doctors in tow.

“Ever since, Penn, wearing camouflage khakis and carrying a Glock handgun, has been living in a tent not much larger than an army-surplus locker. And this spring the actor and his organization–who toil alongside Haitian colleagues, fellow aid workers, and army rangers — were designated by their fellow NGOs and U.N. officials as the ‘camp manager’ of the Petionville facility.

“Author Douglas Brinkley, the historian, V.F. contributing editor, and a decade-long acquaintance of Penn’s (the pair volunteered in New Orleans in 2005 shortly after the devastation of Hurricane Katrina), traces the humanitarian and personal motivations of the typically press-averse Penn, examining his desire to become an activist in the Phil Ochs mold.” 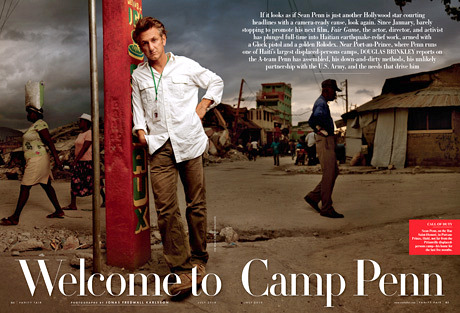