The new one-sheet for David Fincher‘s The Social Network (Columbia, 10.1). Since reading Aaron Sorkin‘s screenplay about the rough-and-tumble beginnings of Facebook, I’ve been calling the film a cyber version of Treasure of Sierra Madre. The poster’s basic conveyance is that Jesse Eisenberg portrayal of Facebook founder Mark Zuckerberg will not be endearing. 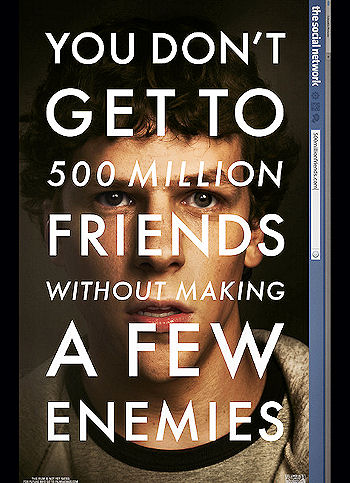 In a 2009 interview with the Baltimore Sun (which I can’t find the link to), Eisenberg allegedly said that Zuckerberg “seems so much more overtly insensitive in so many ways that seem more real to me in the best way…I don’t often get cast as insensitive people so it feels very comfortable, fresh and exciting. The Social Network is the biggest relief I’ve ever had in a movie.”

In a November 2009 set-visit article, Baltimore Sun critic Michael Sragow noted that Zuckerberg “was a controversial figure even before Mezrich’s book came out, accused of hogging credit for Facebook and manipulating other people’s ideas.”

One result of Zuckerberg having never told Mezrich his side of the story, Sragow writes, is that he’s portrayed in the book “as at worst a heartless user, at best a ruthless genius so divorced from normal human discourse he doesn’t even know he’s ruthless.”

“[David] Fincher laughs quietly when asked if Zuckerberg will seem more sympathetic in the movie. ‘I’m not the one to talk about the need for ‘likable’ or ‘sympathetic’ characters,” he said.”

Anecdotal: BBC Urdu is reporting (according to a Google Translation) that Pakistan’s Deputy Attorney General has launched a criminal investigation against Zuckerberg and others “in response to Facebook hosting a ‘Draw Muhammad’ contest on its site late last month.” No charges have been filed, but the Pakistani law (Section 295-C of the penal code) that the contest may have temporarily violated (as Facebook removed the contest from its site last month) calls for a punishment of death or imprisonment for life.