I know what I’m supposed to say about the just-released Spartacus Bluray, which I finally bought and saw last night in my modest Brooklyn apartment. I know what the general consensus is, and I’m all for being a joiner. I’m supposed to agree with the condemnation of this disc that Robert Harris, the restoration maestro who brought the original Spartacus back to life in 1991, posted two or three weeks ago. Just get in line and say it, affirm it — Spartacus is an affront! 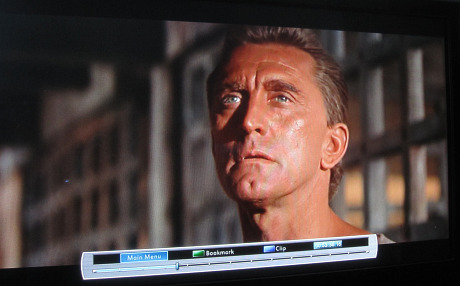 More particularly I’m supposed to say yes, the Spartacus Bluray looks like a son of Patton — a plastic piece of digitally-wiped shit. Electronically sharpened, haloed, and scrubbed free of all the high-frequency detail in Russell Metty‘s Super Technirama 70 lensings.

There’s no question that the Spartacus Bluray has been scrubbed down. Last night I put my face about 15 inches away from my 42″ plasma and studied Jean Simmons‘ face during one of the first-act closeups, and it’s like she’s wearing too much base — not the flesh-covered stuff you buy in pharmacies, but the digital kind that washes away organic sincerity. 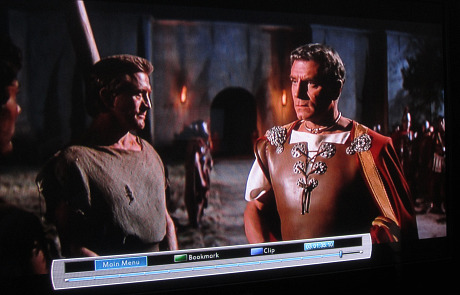 There’s just one problem. If you step back from the screen — sit three or four feet away, I mean — the Spartacus Bluray looks way better than the Criterion DVD or the laser disc or any other version that I’ve ever seen. For the first time since seeing Harris’s restored print on a big screen, I felt dazzled by some of the images. I was saying to my son Dylan, “I’m not supposed to like this but whoa…look at that!”

Harris will probably get angry when he reads some of these words, but this Spartacus delivers some of the sharpest, most gleaming and best-looking pop-out images I’ve ever seen of Stanley Kubrick‘s 1960 film outside of a theatre. As long as you keep your distance from the plasma screen, I mean. And especially if you squint a bit. 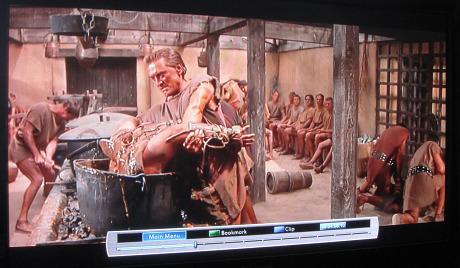 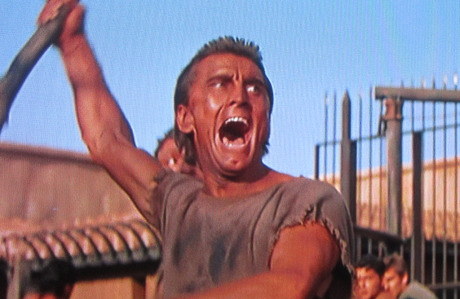