What’s the deal if you’re the author of some excellent magazine articles from the ’90s, ’80s or before that have never been scanned or archived, and therefore aren’t findable on Google? I’ll tell you what the deal is. Your work pretty much ceases to exist, and if you’ve retired or moved to Tibet or what-have-you then you’re pretty much a ghost. Magazine writers have to have their hands and pawprints in the 21st Century cyber world, or they’re dead. 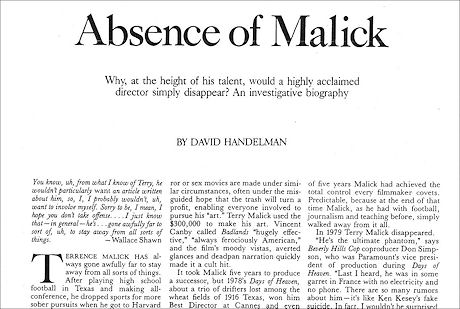 Last night I heard from TV and feature writer David Handelman, who’s in the prime of his life and decades from being over. But the “ghost” syndrome has affected one of his articles — i.e., a superb 1985 piece he wrote for California magazine called “Absence of Malick.”

Handelman wrote that he was mildly pissed that I’d mentioned the California article but not his name in a March 2009 HE piece called “Malick, Olstein & Me” — a recollection of how I nearly died researching and writing a laborious Malick profile in ’90 and ’91, only to see it manhandled and diminished by Los Angeles editor Andy Olstein in ’95. I wrote Handelman back and explained that I’d forgotten his name that day and was unable to Google any record of his Malick piece online, so I just moved on.

The long and the short is that I said I was sorry and fixed the March ’09 piece — it now contains the proper credit. I explained that the best thing that day would have been for me to stop writing “Malick, Olstein & Me”, and then drive down to the Academy library on La Cienega and dig up Handelman’s California piece (which is almost certainly in the Academy’s Terrence Malick file) and yaddah-yaddah. I should have but I didn’t because I felt it more important to get the piece done and worry about fixing the knick-knack oversights later.

I told him that when I discovered that (a) there was no Google mention of his 1985 Malick article, and (b) that at least two others had ripped off the title “Absence of Malick” I figured it was open season and there were bullets flying and I wasn’t about to stand up in the midst of it. A Google search told me that Andrea Vancher wrote a piece called “Absence of Malick” for American Film in February 1991, and that David Gregory made a film called Absence of Malick in 2003. There’s also a Caryn James article that uses it, I think.

“You created that title as far as I know, and here are two people who ripped you off cold,” I told Handelman. He wrote back and explained that Andy Olstein, who was working under California editor Harold Hayes in the mid ’80s, had thought it up. Olstein again!

Here‘s a recent article by Handelman called “The Ones That Got Away.” 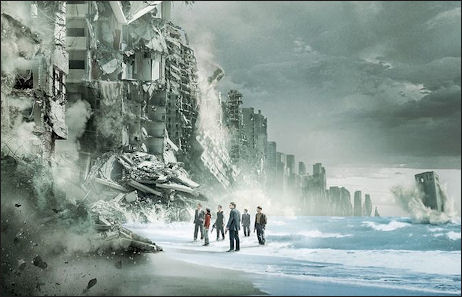 Boxoffice.com’s Phil Contrino reports that by Sunday night Inception will have $58,500,000 in the domestic bank. It made $21.3 million yesterday on 3792 screens, counting about $3 million made from the Thursday midnight shows. So it really made about $18 million last night — let’s be fair.

The last figures I saw were 18 first choice, 23 unaided awareness, and a 48 definite interest, which indicated to me (and I realize I’m not exactly a box-office wizard-slash-Nostradamus) a $45 to $50 million take. So this is a little better than expected — fine.