Sit Down, Stand Up

When an actor sitting down is almost eye-level with an actress who’s standing up, and the actress isn’t playing his six year-old daughter and the actor is slumping a tiny bit in order to compensate, you’re talking about a fairly unusual physical dynamic in a movie. You do have to admit that. Perhaps this isn’t even a frame-capture from the film, and therefore a moot point. Directing 101 says to never compose a shot that emphasizes radical physical disparities, and Chris Nolan is no dummy. 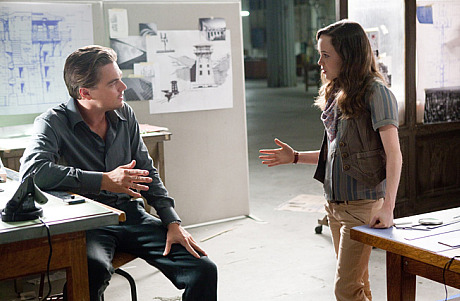 Thankfully, Leonardo DiCaprio and Ellen Page play colleagues in Inception and not lovers. (If they had it would have meant a repeat of the bizarre body disparity between Page and Michael Cera, who looked almost Richard Kiel-sized when he stood next to her.) I realize that 6’8″ guys sometimes go out with women who are 5’2″ and who weigh a good deal less (120 or 130 pounds), but it’s still weird to visually consider the idea of two adults being this different in size and yet conjoined in some way, even professionally.

I discussed Page’s size issue ten and 1/2 months ago.