I’m presuming that Summit Entertainment chief Rob Friedman is currently in uh-oh mode about what to do with Jodie Foster‘s The Beaver, the oddball Mel Gibson dramedy that Summit was going to release in the fall. Gibson’s latest public-relations disaster, I suspect, has led Friedman to think about bumping Foster’s film into spring or fall 2011 on the assumption that the blowback to Gibson’s racial rhetoric will be less damaging if they let everything simmer down, etc. 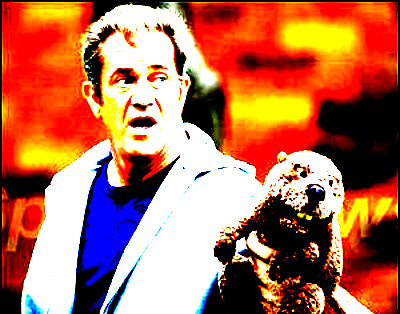 That would be very unwise. Because they’ve got a hot iron in Gibson playing a nutbag, and they should strike while it’s hot. Instead of turning tail, Summit should open The Beaver as soon as possible. In September and October, I’m thinking. Wait any longer and they might “lose the momentum,” as Faye Dunaway explained to Robert Duvall in Network.

(a) Most people have understood for years that Gibson is one of the craziest and most hyper actors around (a trait that first surfaced in ’87’s Lethal Weapon) and that if anyone was born to play a middle-aged guy who walks around speaking through a beaver hand-puppet, it’s him. He may make the Grand Wizard of the KKK sound like the late James Farmer, but Gibson is the truest living embodiment of Three Stooges insanity living today.

(b) Kyle Killen‘s script of The Beaver was named the hottest Black List script of ’08. And Foster may have translated it into something special. What a waste if this film gets all but dumped by Summit! All that hard work, all that buzz, and that admiration and potential and the whole thing goes south because Gibson was recorded saying horrid things to his ex-girlfriend? That’s ridiculous.

(c) Surely no one at Summit is deluded enough to think that press won’t bring up Gibson’s racist remarks any less persistently if The Beaver opens in April 2011 or August 2011 or September 2012? The wisest thing would be to open it as soon as possible and just blow through that shitstorm and say “fine, whatever, Mel is an actor who acts in the movie, his personal issues are not our concern” and so on. Just man up and do it and no pussyfooting. 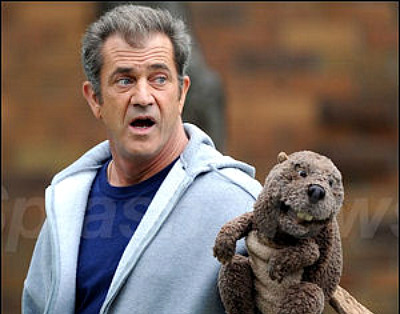 (d) Jodie Foster will put the Gibson bugaboos to bed when she does interviews for The Beaver. She’ll keep emphasizing over and over what a natural comedian he is, and how much she respects him as a performer, and how badly she feels about anyone suffering from a temper problem and retrograde attitudes but we all say ugly stuff that we don’t mean in our worst moments, and that a lot of Hollywood types say things to each other in private that they wouldn’t want to hear on the internet, and that perhaps we shouldn’t point fingers too strongly, etc.

(e) Gibson is a repellent figure now, but playing a nutter would be seen as a form of self-portraiture, and that would make The Beaver a hot ticket. As Bill Maher recently said, there’s an audience for what Gibson (or his image) has become — a repellent ayehole who’s articulating the last dying remnants of ugly racial thinking. “Dying” in the big-city regions, I mean, because racial resentments are more alive in flyover states than most Hollywood liberals appear to realize. There are millions of closet racists (right-wing and lefty) who probably relate to Gibson on some buried level and are probably cutting him another break in their heads. Among those who still care, I mean.

(f) There is also a slight sympathetic belief that while Gibson was stupid enough to not only lose his temper with but allow himself to be recorded by a woman he’s in a custody battle with, he was nonetheless sandbagged and sold out. Many feel that even ugly people saying ugly things should be afforded a certain privacy.

If you were Leonardo DiCaprio‘s manager and agent, would you be advising Leo to do that Vikings movie with Gibson or would you advise him to back off for the time being?