Having seen Robert Rodriguez and Nimrod Antal‘s Predators, I was shocked this morning to see a Rotten Tomatoes riff-raff rating of 71%. Some film critics are just go-along whores. Anyone who tells his/her readers that Predators is some kind of rock-out popcorn thriller is just slacking off. All it is, at best, is a time-passer. No tension, no originality, no rooting factor. It’s a re-tread and a re-hash, which is what you always get when Rodriguez, who produced, is behind the curtain in any capacity. 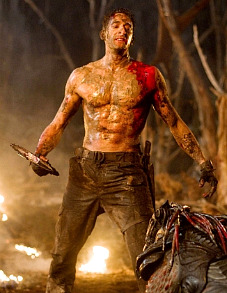 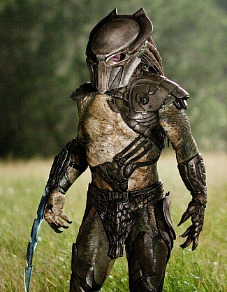 The opening shot is of Adrien Brody, playing a Max Max-ian mercenary, free-falling through the clouds. He’s a few thousand feet up, having been pushed out of a plane or something, and is writhing and groaning because he can’t open the chute. Now, the 2010 edition of The Bullshit Action Movie Manual states that the hero can never extricate himself from any tight situation until the last possible instant. So the question is whether or not Brody’s chute will open sooner than expected, or whether he’ll use a little ingenuity (like cutting open the chute packet with a knife) to release it, or whether something a little bit unexpected will occur. What happens? More writhing and groaning, no ingenuity with a knife, and the chute opens at the last possible second, or about 250 feet above ground.

As soon as this happened I knew this movie was basically dead meat, and I along with it. I knew it might throw in a twist or two, but that it would adhere to the usual cliches and expectations. That’s what it does, all right. I sat there in a trance, my mouth half open, slumping like a cancer patient with tubes in my arms.

The set-up involves a crew of violent types who’ve all been dumped onto some jungly Predator Planet as prey for the beasts. There’s no rooting factor for the characters because there’s no way off the planet (that’s for the sequel) so it’s basically a Ten Little Indians thing set in an outdoor prison, so who cares? It boils down to who’s going to get killed first, and how.

And there’s no particular thrill to the Predators because they’re just played by these tall muscle-bound guys with gray-skin makeup and Predator masks. (There are two Predator species in this film — the dominant wolves vs. the less-powerful dogs.) And I hate that stupid gurgly sound they all make. Hell, that all monsters make. King Kong throwing up, gargling with vomit, a pig getting his throat cut.

We all know that gradual group kill-offs are always determined by ethnicity, repellent characteristics and/or likability, and star power. The two biggest names (or the actors with the biggest roles) always survive to the end, although they usually come very close to dying during the last ten minutes, and are usually saved at the last second by a character who’s been a selfish prick all along but who decides to show the better angels of his/her nature just before the bell. Non-Anglos are usually the first to die followed by the morally repellent, although now and then an ethnic male will survive until fairly late in the game. (Not this time, Trejo.) Then it’s time to kill off the likable characters played by no-name actors. It works this way every damn time. And especially if the filmmakers are being led around by a genre-wallowing stooge. 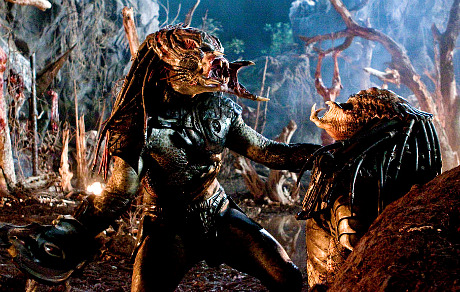 Antal “directed” and the script is by Alex Litvak and Michael Finch, but Rodriguez was the spokesperson and pep-talker for Predators at the 2010 South by Southwest festival…okay? The guy made one cool and disciplined little movie, El Mariachi , in ’92 and has basically been Herschell Gordon Lewis ever since — a sloppy sex-and-blood freak. I mean, he saunters around Austin in his straw cowboy hat and his shitkicker boots and he cranks out genre cheese. To watch a Rodriguez film is to sink into warm and familiar quicksand. His films will always deliver a certain B-movie proficiency (i.e., slick values tempered by a modest budget) and plots that never stray too far from the path.

What gets you through are the performances. Especially Larry Fishburne‘s Act Two cameo. He plays some kind of eccentric commando who’s been hiding out inside a crashed space ship on Predator Planet for God knows how long. Fishburne flew into Austin, did two or three days at Troublemaker Studios, collected his check and flew back out. He’s like a cross between Marlon Brando in Apocalypse Now and Jon Voight’s nutjob in Anaconda, except he might weigh more than Brando and Voight put together. He was a skinny teen in Apocalypse Now and in reasonably good shape in the first Matrix movie…what happened?

Brody, all buffed up and covered with spray sweat and slinging a machine gun, handles the cryptic machismo thing pretty well. Alice Braga knows exactly how to make so-so lines sound better than they are, and more than holds her own. (On top of which she had a first-rate hair stylist standing by the ready, carefully misting her black hair and making it fall across her forehead and face in perfect curly tendrils.) Topher Grace , not playing a mercenary but a wimpy middle-class doctor with a secret, does his usual wise-ass yuppie thing.

Aaahh, this is more like it — a 50% Rotten Tomatoes elite rating. If you remove the blow-jobbers from the equation you’d have ratings that make more sense. Predators is passable to sit through if you don’t care about anything, but it’s a soul-sucker if you do. The Rodriguez virus will get you every time. Don’t expect the dopes to figure this out.