I’m way late to the table regarding Lance Daly‘s scruffy and charming and very well-acted Kisses, which Oscilloscope Laboratories is opening on July 16th. And yet it’s one of the best films I’ve seen in 2010. It’s not without issues, but it has this honest, no b.s. young-love groove that I believed and fell into in a sort of Ken Loach-y way. The problem is that it’s been around forever and I can’t expunge that fact from my mind.

It may seem too inside-baseball to go off on this, but it does feel a bit funny to call Kisses a 2010 film considering it was shot between late ’06 and ’07, premiered at Telluride and Toronto almost two years ago, is regarded by the IMDB and Rotten Tomatoes as a 2008 film, and played theatrically in England last summer.

For whatever reason I missed Kisses at Toronto’s ’08 festival. I don’t even remember hearing about this occasionally twee but engaging and natural-vibey Irish kids-on-the-run film, but whatever — Oscilloscope Laboratories saw it, got it and acquired it for theatrical. And then sat on it for the better part of two years.

Kisses scored an 83% positive when it opened in England in the summer of ’09, but still no Oscilloscope action. It’s finally beginning a city-by-city break on 7.16 and good for that, but — I know I shouldn’t be harping on this so much — the time-passage element makes it’s hard to feel the full-on jazz. The two barely pubescent leads — Shane Curry and Kelly O’Neill — were 10 or 11 at the time, and are now 14 or 15 and several inches taller, I was told after last night’s screening. Jett commented as we were leaving that the roller-wheel sneakers the kids buy at a Dublin mall during the film’s second act were happening about four or five years ago, but no longer.

It’s stuff like this that slightly ages a film, sometimes in ways you can spot and sometimes in ways that you can’t; it also underlines a point I made a year or two ago that you need to get a film into commercial circulation no later than 18 months after filming, and preferably within a year. There has to be a feeling that the audiences seeing a film at a given point in time are sniffing the same cultural pollen that the filmmakers did when they did principal photography. I mean, this film was shot well before anyone was even starting to talk about Barack Obama being a semi-credible candidate for the Democratic nomination. 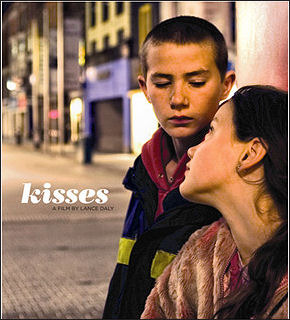 You could speak dismissively and say Kisses is a short film that runs feature length, and that its story of two kids, Dylan (Curry) and Kylie (O’Neill), who, traumatized by abusive families, decide to run away together to Dublin on Christmas eve, isn’t developed enough. And that it over-works the Bob Dylan references, and goes for the “endearing moment” once or twice too often.

But when it’s good, it’s really good. Curry and O’Neill deliver the most unaffected and emotionally sincere performances of unhappy kids I’ve seen in a long, long while. The shooting and cutting are mostly lean and down to the bone (except during the occasional seizure of the “cutes”). And Daly’s going from black-and-white to sepia-toned color to full color and back to monochrome again is…okay, obviously the old Wizard of Oz playbook, but for my money Daly makes it work all over again.

It’s very worth seeing, it’s definitely above average, it’s among the best I’ve seen this year and thank God for the occasional subtitles. (There’s really no understanding the Dublin accents without them.) But why was this…okay, somewhat flawed little jewel of a film kept on the sidelines for so long?