I gulped when I read about Michael Douglas’s situation. Gulped and grimmed up, I mean. Sounds like a bad break. Here’s hoping.

In all candor, in all seriousness — The Expendables is only a little bit better than this 1973 piece of shit. The announcer is required to say “Black Mama, White Mama” about eight or nine times, and it starts getting really hilarious around the fifth time. The poor guy uses every inflection trick in the book to not sound like a putz, but he can’t beat it. The seed, of course, was Stanley Kramer‘s The Defiant Ones (’58).

Here’s part one of the Submarine Channel’s three-week-old interview with main-title designer Kyle Cooper; part two is embedded below. You can argue that Cooper’s most famous contribution to the form is still his main-title sequence for Se7en, although I’m a huge fan also of K.C.’s (and Thomas Cobb‘s) opening credits sequence for John Frankenheimer‘s The Island of Dr. Moreau.

The portion below explains “three classic main titles that made a big impression on Cooper — The Dead Zone(Wayne Fitzgerald), To Kill A Mockingbird (Stephen Frankfurt) and Walk On The Wild Side (Saul Bass). Cooper [also] talks about his credit sequence for Dawn of the Dead, arguably one of his greatest next to Se7en, which was hailed by New York Times Magazine as “one of the most important design innovations of the 1990s.”

Over a decade before the Woody Allen-Soon Yi scandal and 28 years before Roman Polanski‘s arrest in Zurich, there was a delightful little French film about a 30-something piano player (Patrick Dewaere) reluctantly and guiltily slipping into a relationship with his 14 year-old stepdaughter (Ariel Besse). Largely, it must be said, because her pursuit of him is so urgent and relentless. Yep, yep…cue the outrage! But in its own delicate and melancholy way, it worked. Only in France, I suppose, and way back when.

The film was Bertrand Blier‘s Beau Pere (’81), and for some reason it came to mind an hour or two ago. I don’t feel the slightest guilt in recommending it.

Something tells me that such a film would never be made in today’s France, and it goes without saying U.S. viewers would never tolerate the thought, much less the reality, of a Hollywood version. But it’s a genuinely likable and sensitive little film, or so I recall. It’s quite a feat to pull off a tricky situation of this sort without sounding the moral alarm bells, but Blier somehow managed it.

All I know is that it felt mostly okay when Dewaere and Besse had their intimate moment. I can’t remember if it happened more than once, but I know the tone was calibrated just so and Dewaere’s guilt was performed at just the right pitch so that Beau Pere didn’t feel like Lolita. Don’t ask me to precisely explain. It’s been nearly 30 years since I’ve seen it. No VHS, laser disc, DVD…nothing.

I just wish I still lived in a world in which films like Beau Pere were made and seen and enjoyed and then shrugged off. No such luck in 2010 Trollworld. It’s a matter of seconds before somebody makes a crack…forget it. Not going there.

Beau Pere‘s Remi is one of Dewaere‘s best roles, and nearly his last. He shot himself in July 1982, or roughly a year after Beau Pere‘s release. Deweare was also superb in Blier’s Going Places and Get Out Your Handkerchiefs.

For many years the N.Y. Film Festival has become more and more cloistered and dweeb-minded, less and less in the swing of things, eclipsed by Toronto, Telluride and Venice, folding more and more into its own curated, walled-off mentality, subsisting more and more on cultural goat’s milk and resting on the laurels of a diminishing reputation.

And then just like that & out of the blue…wham! David Fincher‘s highly anticipated The Social Network is announced as the opener of the 48th NYFF, Julie Taymor‘s The Tempest becomes the centerpiece and now Clint Eastwood‘s Hereafter has been booked as the the NYFF’s closing night attraction.

Yeah, I know — Eastwood’s films have played NYFF before.** It nonetheless seems that all of a sudden this once-moribund festival has a pulse again. My guess (and it’s only a guess) is that associate film programmer Scott Foundas, an astute and well-liked former film critic with solid industry relationships, has significantly contributed to the new vibe. Todd McCarthy, who’s joined the selection committee, is also feeding the flame.

All I know is that Foundas joined the Film Society of Lincoln Center late last year and McCarthy arrived last spring, and suddenly I’m feeling excited about the NYFF for the first time in…what, eight or nine years? Longer?

Indiewire‘s Anne Thompson wrote the following last November: “Unless Foundas screws up (as one-time heir apparent Kent Jones did), down the line he could be in a position to run the New York Film Festival. Why give up the gig as one of the country’s most powerful film critics otherwise? Eventually, 22-year NYFF veteran Richard Pena will move back to academia, [being] an associate professor at Columbia University.”

** There’s apparently a report that Hereafter might also turn up in Toronto — looking into this as we speak.

No Comments
The Girl Who Lacked Charisma

I’m sure I’ll eventually be forgiven for feeling underwhelmed about David Fincher‘s decision to hire Rooney Mara as Lisbeth Salander in his English-language version of The Girl with the Dragon Tattoo. I don’t know what it is, but on some level she seems…I’m searching for the word. Opaque? Unremarkable? I’m not thinking off-pretty — she’s mildly attractive — as much as off-charismatic. I’m just not getting that Vivien Leigh voltage.

The fact that I’m a much bigger fan of her older sister, Kate Mara, makes me a fuddy-dud, I suppose.

Fincher knows Rooney Mara from a costarring role she’s played in The Social Network, which will have its big debut at September’s N.Y. Film Festival.

The adaptation of the Dragon Tattoo flick, to be produced by Scott Rudin, is based on an adaptation by Steve Zaillian. Shooting will reportedly begin next month in Sweden. Vait…in Sveden? So the actors in Fincher’s film are going to talk Eenglish vith a Max von Sydow or Liv Ullman accent?

Because the Salander casting is a matter of some importance to millions of fans of Stieg Larsson‘s “The Girl…” trilogy doesn’t mean it’s all that big of a deal from a Movie Godz perspective. A tough bisexual girl who’s a genius with digging stuff up online and finagling computer code = tough-assery and empowerment. Well and good. But it’s a big deal because of the money, because of the 40 million copies sold in 44 countries and blah, blah. If there’s something else going on here, I’d like to know what it is. 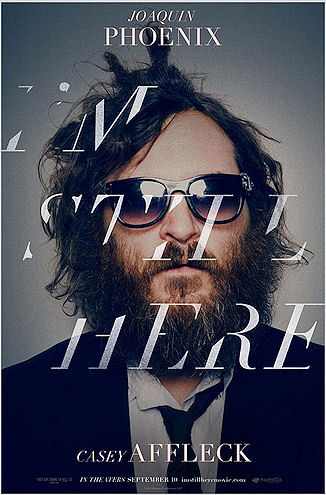 L.M. Kit Carson and Lawrence Schiller‘s An American Dreamer, a 1971 doc about the late Dennis Hopper, was screened last night at the Walter Reade theatre by the Film Society of Lincoln Center. Speaking as a longtime pal of Carson’s and an admirer of Schilller’s, I regret being unable to think of anything remotely flattering to say. The vibe in the room was kindly and sympathetic, but what I heard and felt after the show was mainly polite astonishment. Why had Schiller and Carson decided to even show this thing?

I was stunned by the doc’s shapeless sloppiness, amused and repelled by its portrait of Hopper as a bearded, drug-fried horndog on the verge of destroying his directing career with the abomination that was The Last Movie, and appalled at the ugliness of the print (faded sepia-tones having replaced whatever color it had to begin with).

You might expect An American Dreamer to be a portrait of an allegedly gifted director (Hopper helmed Easy Rider two years before the doc was shot) at some kind of personal crossroads, his state of mind clearly affected (to put it mildly) by pot and hallucinogens. You’re thinking you’ll at least get to sample Hopper’s milieu and personality as he was finishing editing on The Last Movie, a film so allegedly incoherent that it ended his behind-the-camera career until he finally sobered up in the mid ’80s. And maybe get to “know” the guy on some level.

You get to know Hopper, all right. What a shameless, self-absorbed, cowboy-booted asshole. Watching An American Dreamer is enough to make you at least consider the Sean Hannity-Bill O’Reilly-Glenn Beck-Pat Buchanan view of the changes brought about by the counter-culture. And that’s a terrible thing to do to any viewer.

What The American Dreamer provides — and I mean all in and nothing else — is footage of Hopper swaggering, stoning and blah-blahing his way through several willing women at his hippie-commune home in Taos, New Mexico. He stammers on about this and that philosophical issue from time to time, but the bottom line is (a) he’s apparently dead-set on self-destructing and becoming the new Orson Welles (he talks at one point about his suspicion that The Last Movie probably won’t find much of an audience), and (b) there are girls galore — provided, I learned last night, by Schiller and Carson — and he’s going to enjoy as much fine soft flesh as he can get his mitts on. 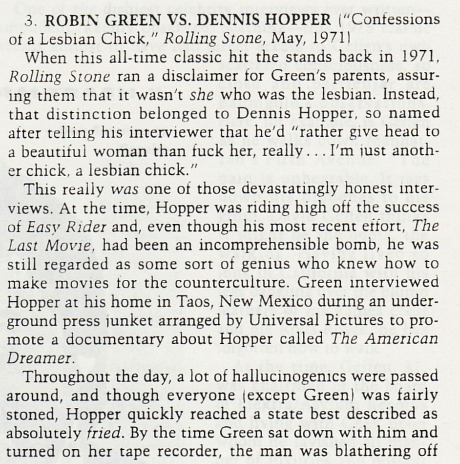 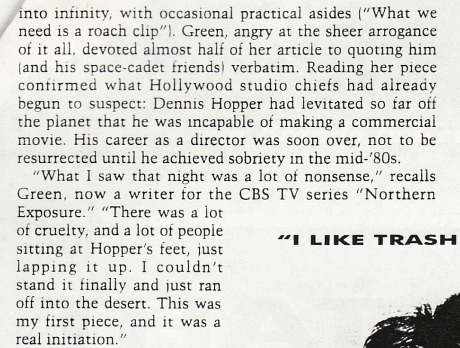 All Schiller and Carson did was just shoot and shoot and shoot as Hopper swaggered around and sampled the wares. And it was awful, just awful to sit there last night and watch this 40-year-old grope-a-thon unfold so haphazardly. Jett, sitting next to me, was chuckling and groaning. “This was the ’60s?,” was his basic reaction. Several serious people were there last night — director James Toback, Entertainment Weekly critic Owen Gleiberman, etc. — and I was sharing with all of them the same two thoughts: “Why?” and “What the fuck?”

If Green’s disapproving perspective had been somehow included in the doc (by way of a hindsight re-edit, say) it might have been, perhaps, half-tolerable, but without it it was all punishment. I summarized Green’s piece in a 1991 Movieline article I wrote called “Ten Interviews That Shook Hollywood.”

I was truly mystified by Schiller and Carson’s decision to show a raggedy “pink” print despite Schiller’s admission that a decent-looking print exists. The good print isn’t being shown, he said, in order to protect it from wear and tear, but why not digitally scan it and show that? Cost, said Schiller. He mentioned a figure of $31 thousand. I called restoration guru Robert Harris this morning and asked about this figure. “First of all you’re going in the wrong direction,” he said. “You don’t want to scan a print but the negative. Where’s the negative?” Nobody mentioned that, I said, but if you had the negative and it was in decent shape, what would it cost to scan it and create a digital master? “2500 to $3000,” he said.