The Wrap‘s Daniel Frankel has reported data that shows moviegoers are becoming less and less interested in paying 3-D premium prices to see mezzo-mezzo 3-D fare. The cause of the situation is (a) “uneven” (underwhelming or flat-out shitty) quality from the films themselves, and (b) the ruinous effect of fake 3-D, which DreamWorks honcho Jeffrey Katzenberg ranted about four months ago. 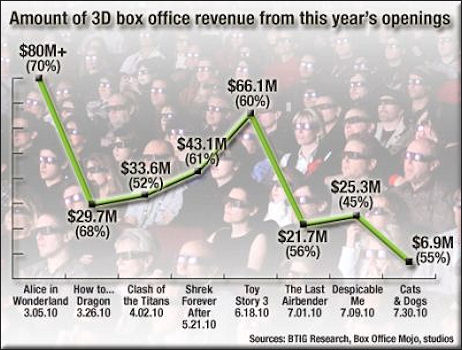 “Nearly 80 percent of Avatar‘s audience saw it in 3D…but 3D’s box-office trajectory has been pointing downward almost ever since,” Frankel writes. The obvious lesson is that if the 3D films that have opened since Avatar were (a) as good as Avatar and (b) delivered the same quality 3D, there probably wouldn’t be a drop in revenue worth reporting about.

Things might have been different also if the fake 3-D used by Clash of the Titans hadn’t poisoned the audience’s attitude about 3-D technology. James Cameron built 3-D into a wow attraction, and Titans delivered the first degradation that gradually convinced audiences that 3D wasn’t necessarily worth the extra cost.

What is Frankel’s report really about? The fact only 45 % of Despicable Me‘s revenue came from 3D showings and Warner Bros.’s 3-D presentations of Cats and Dogs: The Revenge of Kitty Galore grossed only $6.9 million. I don’t know anyone who gave a damn about seeing either of these films, 3-D or flat.

What we need right now (but of course won’t get) is a Hitler/Downfall video with Bruno Ganz subbing for Katzenberg and raging at the greedies for diluting the 3-D brand in record time.