In a wiser and more enterprising world, Michael Keaton would have made history as Ray Nicolette, the not terribly bright FBI agent he played in Jackie Brown and Out of Sight. He could played him in a stand-alone Ray Nicolette movie. Maybe two or three of them. I pushed for this 12 years ago, and now the shot is gone. And too bad. The basic character elements were all there. Keaton would have killed. 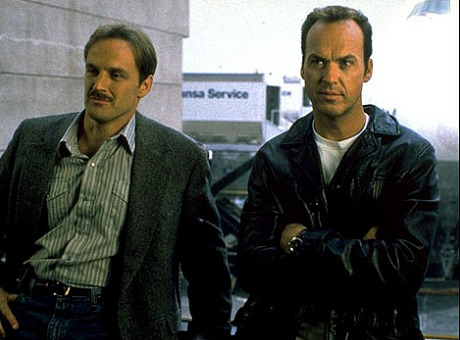 I was hoping at least for a Ray Nicolette HBO series. The adventures, disappointments and odd detours of an intellectually challenged FBI guy. Not an asshole per se but a guy who just doesn’t quite have what he needs (or ought to have) upstairs, and yet he keeps on plugging and, being a federal employee, never gets fired. It could have been great with the right producer and writers.

Here’s how I put it in a seven-year-old Movie Poop Shoot column:

“The Nicolette character always struck me as distinctive and even novel in a quietly funny, ploddingly clunky way — a lawman who’s honest and does what he can to put the bad guys behind bars, but never quite manages to figure all the angles and is always behind the eight ball. We all screw up and miss the point every so often. Ray Nicolette is us. Well, now and then.”