Criterion Guy #1: Okay, everyone’s here? As you may have heard, Criterion is coming out with a DVD/Bluray disc with several very cool movies next fall. All made in the late ’60s or early ’70s by the celebrated Bert Schneider and Bob Rafelson and some other guy…what’s the name again? 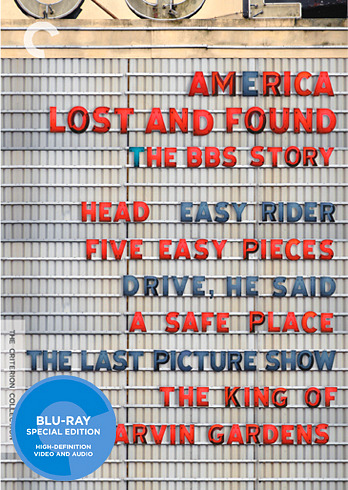 Criterion Guy #1: Blauner, fine. And the idea is to try and market it — now listen to me carefully — we want to market it so as to diminish interest in anyone buying or renting this thing except for film nerd types like…whomever, Gavin Smith, that type of customer. And to even make it hard on them. Okay? I want ideas. How do we do this?

Criterion Guy #3: Why do we not want people to buy this? I’m not…

Criterion Guy #1: Because we’re Criterion…hello? You work here and you’re asking me that?

Criterion guy #4: How about calling the package, I don’t know….call it 40 Year-Old Hollywood Coolness. You know, something that’ll turn off the under-35 customers? By making it seem like a boomers-only thing?

Criterion Guy #1: Yeah, but then we’d get boomer-aged buyers. I want an idea that will turn off everyone. Or at least a title that will mean nothing and do nothing to spur sales with any quadrant. C’mon, people…think.

Criterion guy #5: Let’s call it America Lost and Found: The BBS Story. It sounds partly like some milk-carton lost children thing, and partly like an obscure code for…I don’t know, some British TV station in Manchester or whatever. The point is that it’s extremely fucking obscure-sounding. Like, ridiculous obscure.

Criterion Guy #3: You’re saying people won’t be able to figure out what BBS stands for? It’s right there on the back of the package

Criterion Guy #5: Presumably, yeah, sure. They’ll figure it out. But nobody wants to figure anything out — that’s my point. Any marketing course will tell you people don’t want to consider or ponder anything. They just want to get it fast…snap! Even if they figure out that BBS doesn’t stand for three last names but three first names, which is weird as it is, they’ll never, ever in a million fucking years figure out that the “S” stands for Steve.

Criterion #1: I think you’re on to something.