N.Y. Times guy Michael Cieply has posted an 8.21 piece about Facebook management being mildly angry about The Social Network‘s unflattering depiction of founder Mark Zuckerberg, as portrayed by Jesse Eisenberg. I haven’t seen the film but I’ve read the script, and Zuckerberg comes off as a manic, brilliant and opportunistic asshole — and yet fascinating for that. I don’t want to shock anyone but successful guys can be selfish dicks, and some nice guys actually do finish last. 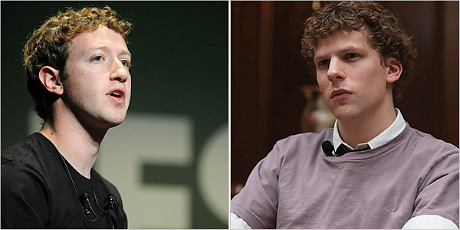 Zuckerberg and friends, concerned about Facebook being indirectly tarnished or made to seem like a slightly dicey environment, have, according to Cieply’s article, decided to ignore The Social Network. But they’ve also told Cieply that some or much of the film is made up.

This may be the case to some degree. Movies tend to exaggerate retellings of true-life stories for dramatic emphasis, and…like, whatever, Francis Bacon wasn’t a naturalist. Welcome to the art world. People want strong points of view, and basically to see the non-provocative stuff pruned down so the provocative stuff can be savored all the more, and so the core issues confronting characters can be addressed in some detail. Didn’t William Shakespeare play more or less by these rules?

And didn’t Zuckerberg create this issue in the first place by declining to talk to Ben Mezrich, author of The Accidental Billionaires, which Aaron Sorkin based his Social Network screenplay upon to some extent? If Zuckerberg had spoken to Mezrich instead of blowing him off, he would have most likely been portrayed more sympathetically. If you’re a serial killer of small children, you’ll come off a bit more sympathetically than not if you talk to the author who’s writing about you. It works this way every time.