The Guardian‘s Shane Danielson took issue today with a sentiment I posted on 8.13 about the extraordinary clarity in the forthcoming Psycho Bluray (which has already been released in England). 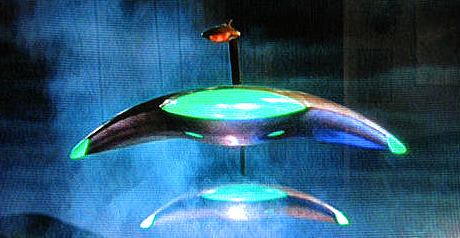 I said I “love being able to see stuff that you weren’t intended to see” — like the pancake makeup on Martin Balsam’s face in a certain closeup — “but which Blu-ray has now revealed.” Danielson says he’d prefer it if Bluray transfers looked less exacting and more celluloid-y. Okay, but he gets too many things wrong in the piece.

One, he says my article appeared “last week.” Today is Tuesday, 8.31, so it actually appeared not last week nor the week before but 19 days or two and a half weeks ago.

Three, he claims that “the Blu-ray edition of Paramount’s 1953 War of the Worlds has given fans much anguish, with the wires holding up the Martian spaceships now clearly visible in almost every shot.” Except there’s no Bluray of George Pal’s 1953 classic. The wires are, however, clearly visible on the 2005 DVD.

Four, Danielson complains that while watching Robert Harris‘s Bluray restoration of The Godfather trilogy two years ago in a Times Square Virgin Megastore that it had “a precision to the images, a sort of hyperreal clarity, that didn’t jibe with my memory of having watched the film, either in the cinema or at home.” In fact Harris worked on the trilogy with dp Gordon Willis and produced one of the most celluloidy-looking Blurays in history. And two, as Harris said this afternoon, “He was probably looking at it on a crappy monitor with the color and contrast pumped to the hilt…don’t watch these films at electronic consumer superstores.”

And five, he asks what the difference is between Warner Home Video technicians digitally erasing the wires holding up the Cowardly Lion’s tail in The Wizard of Oz and George Lucas‘s much-maligned ‘fix-ups’ to the original Star Wars trilogy? The standard, says Harris, is original viewing standards. “if 1939 audiences didn’t see the wires when they saw The Wizard of Oz in theatres, then present-day audiences shouldn’t see them on the Blu-ray.” The line isn’t as clear with Star Wars, but if Greedo didn’t shoot first in the original 1977 version then he shouldn’t shoot first (or simultaneously) in the digitally revised version. Simple.