It’s being widely reported/repeated that a CBS News/Vanity Fair poll has found that three out of four Americans haven’t been turned off by Mel Gibson‘s ugliness, and would probably pay to see him in Jodie Foster‘s The Beaver. 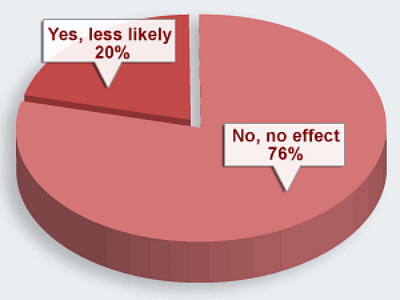 If, that is, Summit had the smarts and chutzpah to release it, which of course they don’t. Because they’re worried about industry consensus and all that. On 7.10 I explained the reasons for ignoring the Gibson scandal and releasing The Beaver anyway.

The exact wording of the Gibson question was, “Are you now less likely to go see a Mel Gibson movie as a result of the recent scandal?” 76% of 847 respondents said Gibson’s comments (“blow me,” etc.) would have no effect on their willingness to pay to see him in a film. (Men were 80% on this point; women were at 72%). Plus I’m betting that a certain portion of the 20 percent who said they’d be “less likely” to view his films are just saying that, and that they’d go if The Beaver came to their local bijou.

What else do you need, Summit? A note of permission from Ari Emanuel?