I have some nagging Toronto Film Festival questions about wifi. In my estimation TIFF has always been the least press-friendly festival in terms of wifi press lounges that are close to screening rooms, certainly compared to Cannes which has two wifi rooms inside the Palais. And from what I can gather so far things haven’t changed much. 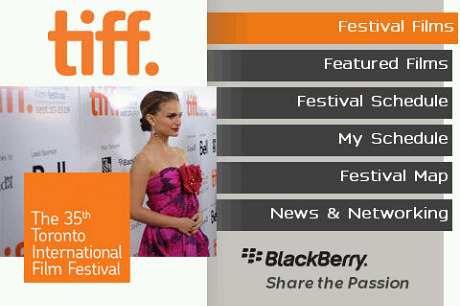 No one will tell me, for example, if the TIFF Bell Lightbox will have any kind of wifi press room with desks and chairs and free cappucino, like the Palais does. Or, failing that, if the Lightbox will at least have accessible wifi for journalists wanting to file from somewhere within.

There will be a media lounge at the TIFF headquarters at the Hyatt Regency (370 King Street West), but this will only be open from 9 am to 6 pm. The two Cannes press rooms are open until 10 pm. Festival press rooms should ideally be open until midnight. Might as well make it 24 hours.

The bottom line is that people like me, as usual, will be scrounging around filing from Starbucks and wifi cafes. What a slog. As if covering 25 or 30 films within a nine-day period isn’t hard enough.

And what about a Toronto Film Festival iPhone app? Sundance 2010 had a great one. I searched around today and found nothing. There is, however, a Blackberry TIFF app. I’m told this is because BlackBerry is a major TIFF sponsor. So sweetheart kickback deals are what matter and iPhone owners can go suck on a lollipop. The fix is in.