I understand that Eat Pray Love (Columbia, 8.13) is for over-30 women and gay guys, for the most part. But speaking as a yellow-sneaker-wearing metrosexual film buff, I’d like to find a place for it in my head. I’m down with any woman-friendly film that at least tries to deliver the basic goods. Give me some reasonably rounded characters, believable motivations, smartly sculpted dialogue and a reasonably satisfying story, and I won’t squawk. Really. 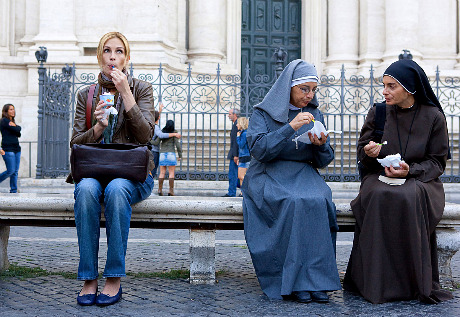 On top of which I’m a sucker for beautiful footage of Rome, Naples, India and Indonesia. That is, as long as the cinematography doesn’t make me feel that these locales have been, in a manner of speaking, re-constituted according to the requirements of sumptous big-studio imagery. Beautiful places always seem cooler when they haven’t been lighted too carefully.

So I don’t have an attitude about this Ryan Murphy-directed film. I do have a blockage, yes, about Julia Roberts. I look at her and see a raging me-aholic, but then I’m a me-aholic myself so I should be able to get around this. I was fine with her in Ocean’s 12, especially during the Rome hotel scene when she was playing a character who was pretending to be herself. As long as she doesn’t do that cackling laughter thing, I’m cool.

My other attitude is that any film with Richard Jenkins, Javier Bardem and James Franco can’t be all that bad.

I’ve called around this morning and haven’t found anyone yet who’s seen it. The Eat Pray Love premiere and the press showings are happening next week, and I know it was recently shown to the junket crowd in Napa, and to Stephen Farber‘s film class last night.

All this said, I couldn’t help but laugh when I read the following comment on the IMDB chat board” “Watching Eat Pray Love [will be] exactly the same as having a testicle removed.”