Seven years ago I researched and wrote a piece about the leading eccentric film critics of the day, and I thought it might be fun to revisit this topic and ask once again, “Who are the reigning loons?” It’s fair to say the roster has probably expanded with the growth of internet film sites. Keep in mind, of course, that there are good nutters — picayune contrarians off on their own moonbeam, but smart and feisty and often a kick to read — and bad nutters, which is to say illogical fruitloops who seem to exist to curry favor. 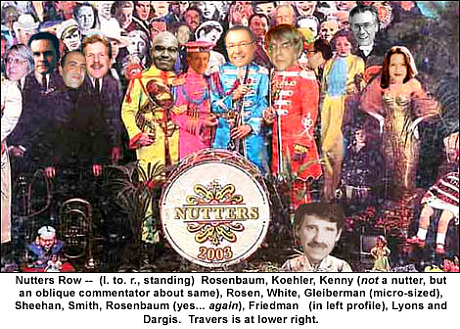 “Nutters are made, not born,” I wrote in 2003. “I’m kind of one myself, but I didn’t start out this way. I came into this racket as a relatively sane, even-tempered youth, wanting only to be spelled and lifted up by those wonderfully crafted confections I’d first seen as a child on late-night TV. Now look at me — delighted by those 20 or 25 movies each year that ring my critical bell, but most of the time oozing acid cynicism and choking from the residue of a thousand crappy films released over the Hollywood downturn period of the last 22 or 23 years.

“You could subject St. Francis of Assisi to the same experience, and at the end of the road he’d be a film critic version of Kirk Douglas‘s character in Ace in the Hole, or else a complete junket-whore sellout. One way of not giving in to a Douglas attitude is to isolate and perhaps over-praise any film that comes along that seems the least bit unusual or distinctive. Then, at least, you have something to root for.

“There are two kinds of nutter film critics — the good (i.e., scrappy, finger-poking, irreverent) and the bad (lazy, smarmy, go-alonger). But ask around about the nutters who irritate or tick people off the most, as I did last weekend, and you’ll find that most of them ignore the softies and take aim at the rarified elite. I guess it’s always the oddball malcontents in any society who get singled out for punishment.

“‘Good’ nutters may irritate people, yes, for their high-horse pans of movies many of us have enjoyed or loved, or for their praising of movies that only they and other nutters have seen at European film festivals, but at the end of the day their occasional support of obscure filmmakers and a general willingness to buck the popular tide obviously lives up to the job description of ‘film critic’, and is obviously better for us culturally than not.

“Whereas the easy lays who give passes and sometimes raves to big-studio dreck and whose pulses invariably race at the prospect of taking home another goodie bag…well, fill in the blank.

Here’s the original article again. Send in your nominees and we’ll go from there.