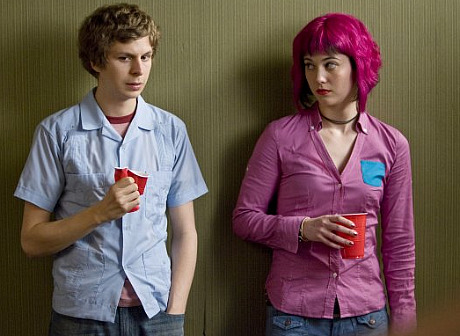 It’s kind of nifty if you want to feel connected to a movie that under-30 moviegoers are responding to. It’s empty and strained and regimented, but…you know, cool and funny and clever, heh-heh. It has wit and vigor and smart music, and it gradually makes you want to run outside and take an elevator to the top of a tall building and jump off.

I didn’t want to kill myself while watching Scott Pilgrim vs The World. That notion or impulse came later. I know that if movies are in fact going to be moving more and more in the direction of Scott Pilgrim in the coming years — video-game inspirations, glib dialogue, wimpy girlymen in lead roles, bullshit video-game fight scenes, laid-back gay guys engaged in threesomes in shitty basement apartments — then I really would rather die. Because movies as I’ve known them all my life would in fact be dead, and there’d be nothing to live for.

Then again I really liked the music that Scott’s band plays. It throbs and churns with a wowser bass line — not at all like the gay music my two sons seem to prefer these days. And I liked Kieran Culkin, who plays Scott’s gay roommate, and at the same time I wanted to see him cut in half (or into several pieces) with a chainsaw. And I liked the little lovesick Asian girl (Ellen Wong) who has a crush on Scott, and I despised Scott for not being able to summon the puny amount of courage it would have taken to simply lay it on the line and tell her he’s fallen in love with someone else. But…you know, as Scott says early on, “That’s haaaaard.” What a guy.