I’m front-paging a response that I wrote this morning to a reader about Mark Romanek‘s Never Let Me Go (and the Kazuo Isiguro book that the film is based upon). The film opens on 9.15, less than three weeks hence, so it’s time to start kicking things around. 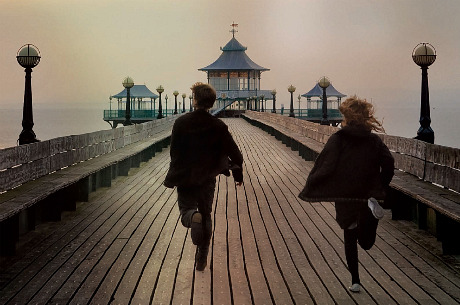 It’s not a very well-kept secret that the book and the film deal with a grim-fate dynamic — an oppressive, locked-down situation in which “a long and happy life” doesn’t appear to be in the cards for the main characters. In response a guy named The Perils of Thinking brought up the notion that facing the fact that you’re going to die is a bracing and clarifying experience.

“The clarity that comes from recognizing where one is heading,” he said, “can allow one to prioritize and make the most of one’s most brutally limited resource.”

Yes, I replied. As in that famous saying about how “the clarity of mind that comes to a man standing on the gallows is wonderful.” As in face facts, sharpen your mind and prioritize.

I’ve always been one, however, to take it a step further and not just prioritize and all that, but to first and foremost revel and rejoice in the immediacy of the symphony. Death is something to be accepted, okay, but primarily fought and strategized against, frequently laughed at, lampooned and pooh-poohed, acknowledged but simultaneously “ignored” (in a manner of speaking), dismissed, despised and raged against (in Dylan Thomas‘s words) right to the end.

There is only life, only the continuance, only the fuel and the fire…only the next step, the next breath, the next meal, the next sip of water, the next hill to climb, the next perfect pair of courdoruy pants, the next adventure, the next hypnotizing woman, the next splash of salt spray in your face, the next staircase to run down two or three steps at a time, the next rental car and the next winding road to concentrate on and carefully negotiate, etc.

Knowing your time on earth is limited and that the clock is pressing down leads one to value the time left and to treat each day as if it’s your last…of course. But The Perils of Thinking also said that “as far as I’m concerned, resignation to (or, to use a less negative connotation, acceptance of) one’s ultimate fate is one of the more rewarding and true experiences any human can experience.”

Resignation and acceptance? I know what he means but somehow those terms sound more like what a person with terminal cancer has to come to terms with than a person living a robust life.

The basic premise of Ernest Becker‘s “The Denial of Death” (1973) is, to go by one summary, “that human civilization is ultimately an elaborate, symbolic defense mechanism against the knowledge of our mortality, which in turn acts as the emotional and intellectual response to our basic survival mechanism.

“Becker argues that …man is able to transcend the dilemma of mortality through heroism, a concept involving his symbolic half. By embarking on what Becker refers to as an “immortality project” (or causa sui), in which he creates or becomes part of something which he feels will last forever, man feels he has “become” heroic and, henceforth, part of something eternal; something that will never die, compared to his physical body that will die one day.

“This, in turn, gives man the feeling that his life has meaning; a purpose; significance in the grand scheme of things.”

All to say that from one what I can gather, not having read the book but having read a couple of reviews and a couple of summaries, is that there doesn’t seem to be a great deal of dynamic go-for-it activity along these general lines in Never Let Me Go. Nobody seems to protest, creatively deny, fight against, counter-attack, escape from or anything like that. The young people in the book have been created to donate, and donate they do, and then they die. Great.

A friend who’s seen Never Let Me Go says, “If the film is difficult for some people, it’s not because of the movie’s quality, but simply because it deals with issues that most people are uncomfortable with. The performances are all fine. And the direction is subtle. It has a modesty. It’s all handled with humanity. The point isn’t to wallow in their tragedy, but to relate their experiences to our own. If you understand that, the film slowly builds its power as it progresses.”