The first thing I noticed about the new Movie City News redesign, which looks relatively decent (or at least better than before, being more balanced), is a preponderance of robin’s egg blue. The typeface, the MCN Tweety-bird, the MCN Twitter box, the bars…light blue all around. Plus some light violet. It reminds me of the colors and the vibe in a little boy’s bedroom. 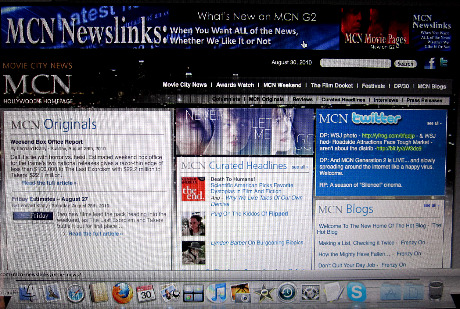 The idea is to convey a certain spirituality or placidity or something. It’s all right or isn’t a “problem,” per se, but it doesn’t feel like a sale. It needs to man up on some level. A little red or orange, maybe.

The second thing I noticed is that Hollywood Elsewhere’s status has been upgraded. After being linked and referred to by MCN for several years as a “gossip,” I’m now included on the “Mainstream Blogger” list (along with Anne Thompson, Deadline, LA Observed, Patrick Goldstein, Roger Ebert’s Journal, The Real Shawn Levy, etc.). Thank you, David. I’ve noticed, by the way, that Deadline and HitFix are listed on the Mainstream Blogger and Gossip rosters. Split personalities?

The third thing I noticed is that the new design disappeared about 11 am Eastern, and that the old design was back in action. Obviously a temporary gears-and-levers adjustment.

Incidentally: I understand about capturing a page image (control – shift – 4) and that if I add control to this combo the image is supposed to appear on Clipboard. Except it doesn’t, and the usual paste function (control V) doesn’t paste it either. So the hell with it.